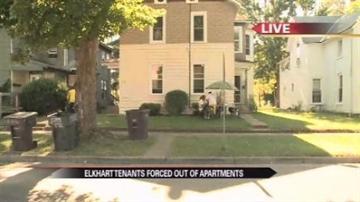 ELKHART, Ind. -- Dozens of Elkhart tenants are on the streets because their landlord isn't paying his bills. He is so delinquent, the city shut off the gas and water to the apartments. Now the residents have no place to go.

Close to 20 people lived in the apartment house on Kinzy Street.

"We don't have no gas and they just turned off the water today," said Tyeisha Hyman.

There are over a dozen people in the same boat because Marlowe Yoder, the landlord, hasn't paid his bills.

"We don't have deposit money. We don't have no rent. We would go if we could. It's not like we would just want to be squatters and live here," said Rita Snider.

Carolyn Gibson has lived here for the past few years, but she says her problems just started this month when sewage started backing up in her basement.

Tyeisha says their refrigerator broke two months ago and her landlord wouldn't fix it.

"He should go to jail or something for what he did to us," said Mike Hyman.

Residents called the police to find out if he could face criminal charges.

"We want our deposit we want our money back," said Tyeisha.

Tyeisha's sister says Yoder lives around the corner, but he won't answer the door.

We went around the corner to try to find Yoder, but he didn't answer the door.

While there the Elkhart Public Utilities pulled up and said a new tenant is going to be renting both the home and the business located there.

Lacasa is trying to find the displaced residents a place to live.

"Apparently their deposits have not been returned to them. We are doing a fundraiser Sunday from 2 to 5 PM at first Congregational Church downtown Elkhart at the corner of 3rd and Marion," said Jason Moreno of Lacasa.

Yoder finally spoke to us around 5 p.m. He says he no longer owns the home.

He said the bank foreclosed on his homes and now the bank owns the homes.

He said he told the residents he would be turning off the utilities and that they needed to get out.