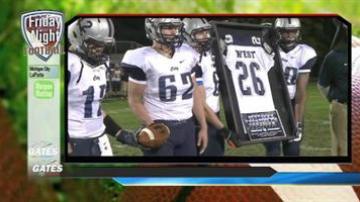 Before the game, Michigan City’s captains presented LaPorte High School with a praying Wolf jersey that had Jake’s name and number on it.

They signed and dedicated the game ball to Jake’s family and then there was a moment of silence-- a moment to remember and pay respect to a teen’s life that was taken so suddenly.

Jake died from a rare heart disease and this was LaPorte's first time playing at home without him.

The team displayed his jersey behind the bench the entire game.

The first touchdown came when the Slicer’s quarterback handed the ball off to number 20 Charles Salary who ran it right past Michigan City into the endzone to make the score 7 to 0.

Salary broke the school's rushing record in the game.

When LaPorte scored, the cheerleaders ran across the track with a flag that had Jake's number 26 on it.