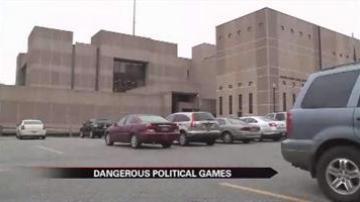 LAPORTE, Ind. -- LaPorte County Jail administrators say they are forced to close the entire fifth floor of their facility after three part-time employees were laid off, plus they say they ran out of money to pay overtime for the rest of the year. These are just a few of the problems the county is facing!

The Sheriff says the issues stem from the county council's rejection for additional funds.

On Friday afternoon, an ABC 57 crew spent the afternoon looking into the controversy and the seriousness of the issues.

Not counting the 69 beds on the fifth floor, the jail can house 368 inmates. Currently the jail is home to 352 inmates and jail administrators said the weekends can be one of the busiest times of the week.

Steve Vance the Assistant Jail Commander said, "We had to completely stop over time, I had to send two people home and we had to move 69 inmates off our fifth floor." The entire floor was vacated! "There isn't enough staff to run this facility," said Vance.

Sheriff Michael Mollenhauer addressed the issues by letter. In a written news release he stated, "The closure is the result of the LaPorte County Council's failure to approve a request for an additional appropriation of $70,000.00 to fund the jail overtime budget for the remainder of 2012. The additional appropriation was needed to properly staff jail operations. Jail operations cannot continue at thew previous level without proper funding."

Matt Bernacchi the LaPorte County Council President told ABC 57, "Him (Sheriff Michael Mollenhauer) closing the jail and him laying off those employees is his decision and not the county councils." Bernacchi says the council turned down the request because the sheriff has other funds available. In fact he said the sheriff recently bought a $50,000 plus vehicle that the board denied from a different budget he has can access without their approval.

Bernacchi, "The council stance is if you have enough money to go buy a $50,000 SUV then you probably have money to pay your officers and your jailers. There are other monies that are available that he can utilize."

Vance said in rebuttal, "We can't confiscate that much commissary money."

And in the meantime as this political game goes back and forth, Vance said things at the jail could get much worse. "Our inmates are being held on the floor it's going to potentially result in legal liability if we don't have a resolution to it quickly!"

The next council meeting is on October 22nd. The Sheriff's news release states, "he (the Sheriff) has enlisted the assistance of the court judges, local law enforcement officials and the Indiana State Jail Inspector's Office in an attempt to convince the county council to change its stand on the overtime issue."

However, Bernacchi and Council Member Earl Cunningham both sounded rather adamant they would not be changing their minds. The board consists of seven council members.

Sheriff Michael Mollenhauer was not available on Friday for direct comment on the controversial purchase of his county vehicle nor on if he has funds from other accounts he can use to pay jail employees overtime hours.