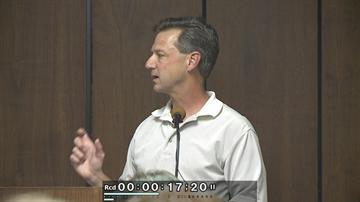 LAPORTE- Ind. -- "Continually, your daughter comes home crying and there is nothing you can do," said volleyball parent Ray Lang.

Ray and Karen Lang say when their daughter went to the head volleyball coach Mary Beth Lebo and told her the assistant coach Robert Ashcraft was having a sexual relationship with a 15-year-old player, Lebo told her to keep quiet.

He said his daughter then faced repercussions from the coach for speaking up.

"If they did they would lose playing time," said Lang.

He said it is worse now, because the board reinstated coach Lebo and the athletic director, Frank Gilliland.  Even though they are being charged with not reporting the incident.  The two were on a seven-month paid suspension.He said his daughter was doing the right things so he came to the board tonight to defend her and ask the board to reconsider reinstating the faculty facing criminal charges.  Faculty he said could have an axe to grind with his daughter.

"She is still in the school and she knows that she can run into these two individuals," said Lang.

But the meeting did not go exactly as he had hoped.  Neither Lebo nor Gilliland attended, and only one board member spoke out against their reinstatement.