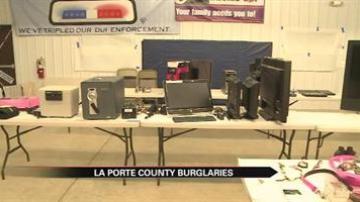 Officials said they recovered stolen property at a home in Coolspring Township on November 26, 2013, after serving a search warrant.

Nicholas Rife, 33 was arrested and charged with one count of burglary and one count of receiving stolen property.

Officials were able to track a stolen iPad to home, just five hours after it was taken.

They hope to return the stolen property to the rightful owners.

It is believed most of the robberies occurred in northern La Porte County within the past three months.

"Burglaries and robberies are an ongoing thing. Unfortunately, when we arrest a person for burglary, it's a short time before another person comes behind them and starts doing it again. We have taken several avenues to try and curtail that," Sgt. Andrew Hynek, La Porte County Sheriff's Office, said.

The Michigan City Police Department is also working the case.