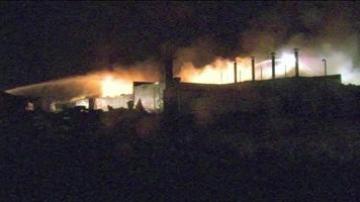 No one was inside the building when it caught on fire, but one firefighter had to be taken to the hospital for chest pain. Neighbors said firefighters worked from 8:30 pm to 11:45 am on Sunday fighting the fire.

William Gilger said, “I heard explosions, there were balls of fire. The flames were so high!”

Gilger has lived next to the Old Campbell’s Mushroom Farm his entire life. Saturday night he called 911 when he heard explosions, and then he saw the structure engulfed in flames when he looked out his window.

Gilger said, “It was crazy. I mean I’ve never seen anything like it in my life. I’ve lived next to it my whole life. It’s sad to see it go.”

The companies that used the facility include Lord Seed, Gro-Alliance, and Incident Commander. One man who worked at the company that grinds corn cob there said they lost a lot of equipment in the fire.

The Chief of Mongo's Fire Department said all of the water used to fight the fire had to be trucked in. He also said they were worried about the wind spreading the fire.

Ike Notestine said, “The high winds, the equipment in the way, the amount of smoke that was coming from the building, we dealt with a lot of issues that impeded fighting the fire.”