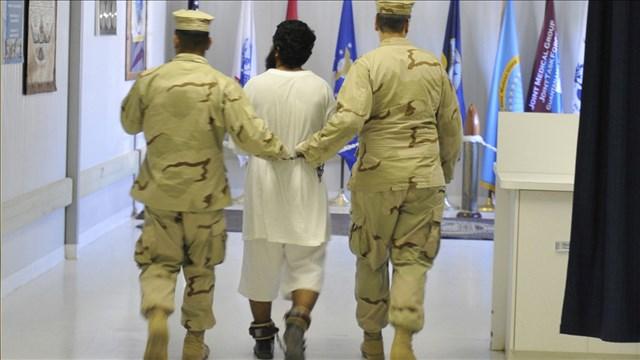 (CNN) -- The US announced Monday that 15 detainees have been transferred out of the detention facility at Guantanamo Bay, Cuba.

It's the single-largest transfer since President Barack Obama took office, according to Lee Wolosky, the US special envoy for Guantanamo closure.

The inmates, who included nationals from Afghanistan and Yemen, will be transferred to the United Arab Emirates, a US State Department official told CNN.

The official added that six of the detainees had been approved for transfer back in 2009. The others had been evaluated by the interagency Periodic Review Board and it had been determined that their "continued detention was no longer necessary to protect against a significant continuing threat to the security of the United States."

The move brings the population at the famed detention facility down to 61. There were 242 detainees at Guantanamo when the Obama administration came into office.

The latest transfer is part of an acceleration in the prison population's decline, with the State Department official noting that in the past 11 months alone, 55 detainees have been transferred to 13 different countries.

The majority of Guantanamo prisoners already approved for transfer hail from Yemen, but the US has had a policy against transferring detainees to Yemen due to the ongoing instability there.

Wolosky thanked the UAE for its "continued assistance in closing the detention facility at Guantanamo Bay" and emphasized the need to shut the prison down.

The administration's latest moves to close the facility quickly drew the ire of Republican opponents in Congress, who have passed legislation that would prevent the Department of Defense from transferring the prisoners there to the US.

"In its race to close Gitmo, the Obama administration is doubling down on policies that put American lives at risk. Once again, hardened terrorists are being released to foreign countries where they will be a threat," said House Foreign Affairs Committee Chairman Ed Royce, a California Republican. "I fear we will be dealing with the consequences of this recklessness for years to come."

Correction: An earlier version of this story misstated the nationalities of the released Guantanamo detainees. They are Afghanistan and Yemen.