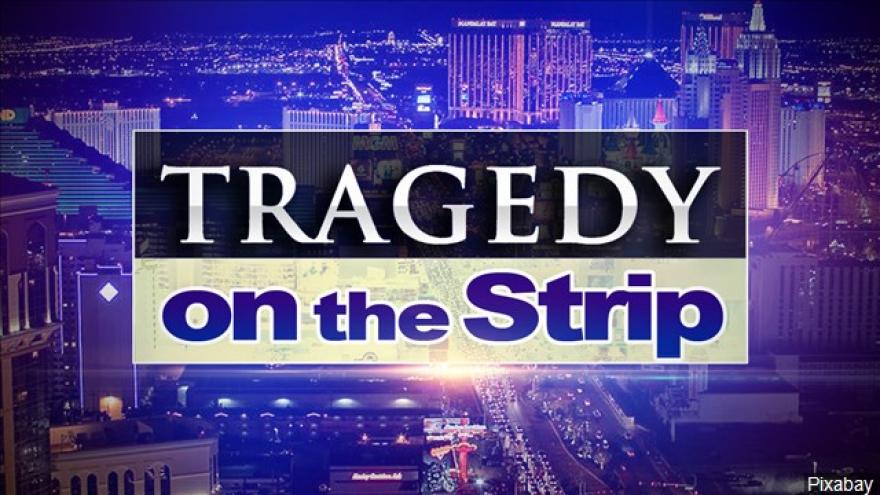 The selection of a hotel room overlooking a music festival, days before the attack. The cache of 23 weapons inside the gunman's Las Vegas suite. And thousands of rounds of ammunition -- plus an ingredient used in explosives -- inside the killer's home and car.

The latest revelation came Tuesday afternoon when police said gunman Stephen Paddock set up cameras inside his hotel suite and in the hallway. Police are not aware whether the devices were transmitting -- the FBI is investigating their use -- but the Clark County sheriff told reporters he thinks the shooter might have used them to watch for people approaching his room.

No one knows why Paddock morphed from a retired accountant to the deadliest mass murderer in modern US history. His relentless gunfire -- police say he fired for nine minutes after the first 911 call -- on country music fans at an outdoor concert left 59 people dead.

Another 500 people are still trying to recover from injuries -- everything from gunshot wounds to stampede injuries suffered when 22,000 people tried to flee the gunman's aim.

-- More than three dozen of the 59 people killed have been publicly identified. Among the latest: Charleston Hartfield of Nevada; Stacee Etcheber of California; Christopher Roybal of Colorado; Hannah Ahlers of California; and Jordan McIldoon of British Columbia, Canada.

-- The Daily Mail newspaper of the UK has published several photos purportedly taken in Paddock's room after the shooting. In one photo, the legs of a body on the floor can be seen. The photos show semiautomatic assault-style rifles on the floor and on furniture. Stacks of ammunition magazines used in rifles can also be seen.

-- Las Vegas police will give another public update on the investigation at 6 p.m. (9 p.m. ET) Tuesday.

-- Authorities continued processing the scene of the killings, where shoes and bags lay scattered.

Brian Claypool is grappling with feelings plaguing many of the survivors -- an overwhelming sense of guilt and confusion.

"I'm going through some guilt now. Did I help enough people? Because everybody was screaming and yelling. I didn't know what to do," Claypool said, choking back tears.

"Who determines who gets killed in this? That's what I'm having trouble with."

The Los Angeles resident said he saw a young woman 15 feet away from him get shot.

"She ended up dying. I happened to be in an area where I didn't get shot. So I guess I have to go the rest of my life wondering why did some of these people die. Why didn't I?"

Paddock's violent transformation has mystified everyone -- his brother, investigators and the families he victimized.

Police had no prior knowledge of the gunman before the attack.

"I don't know how it could have been prevented," Lombardo said.

The massacre has no known link to overseas terrorism or terror groups, a US official with knowledge of the case said.

And authorities say it's too early to tell whether the massacre was an act of domestic terrorism.

"We have to establish what his motivation was first," Lombardo said.

For an act to be considered terrorism, it must appear that it was intended to intimidate or coerce a civilian population, or try to influence political change.

The gunman's brother, Eric Paddock, said he was "completely befuddled" by his brother's actions.

He said Stephen Paddock was an avid gambler who had "no history of violence. No history of anything -- couldn't give a s*** less about politics, religion, pointy hatted people, etc, etc. He just wanted to get a freaking royal flush."

Running back into danger

Country singer Jason Aldean was on stage when bullets started raining onto the crowd.

"On the main floor ... there was no cover -- they were all exposed," survivor Dees Mansholt said. "So you didn't know if somebody was shot or if they were laying down."

Frantic concertgoers piled on top of each other, trying to get out of the shooter's line of fire. But an off-duty nurse ran back into the danger to help those who had been shot.

"We went back because I'm a nurse and I felt I had to," she told CNN affiliate KTNV. "I went to three different scenes, and by the time I got to the third one, there was just dead bodies."

The nurse said she was far from alone.

"There was so many people, just normal citizens, doctors, cops, paramedics, nurses, just off duty. Everyone was just communicating and working together."

Trump says he will visit Las Vegas after massacre

By Tuesday afternoon, a GoFundMe page started by a Clark County commissioner had raised more than $3.5 million.

"Funds will be used to provide relief and financial support to the victims and families of the horrific Las Vegas mass shooting," county commission chair Steve Sisolak wrote.

Throngs of blood donors lined up for hours to help the wounded.

"This is America -- people coming together, helping out." Hector Salas tweeted. "Likely more than 1000 people waiting in line to donate blood.

"It takes the worst of America to also see the best of America," said Mansholt, who survived the gunfire. "Everybody was helping each other."