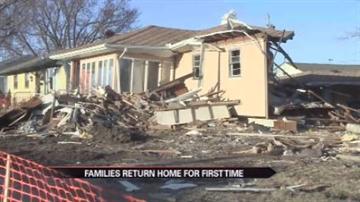 SOUTH BEND, Ind. -- Residents spent much of Tuesday evening moving back into their houses, just 48 hours after a deadly plane crash forced them to evacuate their South Bend neighborhood.

Many saw the extensive damage up close for the very first time. ABC 57 talked with a family who lives across the street from where the plane went down about their emotional return home.

Neighbors like Brad and Bonnie Preston gathered with others to take in the devastation before returning to their homes for the first time since tragedy struck Sunday afternoon.

"I come home and look at all this stuff and it's just amazing that the neighbors that were actually in the houses lived through the crash," said Brad Preston.

The twin engine corporate jet that crashed into three homes may be gone now, but the impact it had on the entire neighborhood can still be felt.

"That was their home for 20+ years and now they can't go back to it," said Preston.

Two of the three homeless families lost everything. Now, as they start to put their lives back together, neighbors like the Preston family are counting their blessings.

"Extremely lucky. Like I said, when I saw the plane coming down I thought it was coming for our house," said Preston. "It did a flip, ya know, and didn't hit ours and unfortunately it hit over there."

Although the shock has worn off, Preston says he still cannot believe his eyes when he looks at what's left of his neighbors' homes.

"Not even living this close to the airport, I never thought there would be a little jet come flying through the neighborhood, not even close."

In the face of this tragedy, these neighbors have come together. Many have even provided clothes for the people who lost their homes and all their belongs.

Even the Preston family is storing a few boxes of salvaged items in their garage for one of the families.