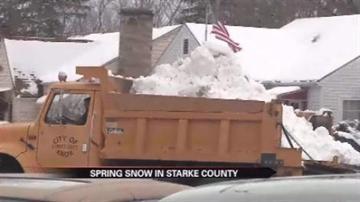 STARKE COUNTY, Ind. -- Even though Easter is this weekend, residents in Starke County are dealing with 5-inches of snow that fell overnight. Road crews were busy trying to clear the roads, hoping it would be the last time this season.

Residents in Knox, in Starke County, Indiana, woke up to gray skies and snow on the ground.

“I woke up to the fire department going to a 4 o'clock car in a ditch, so it was like, ‘Oh no. There's snow on the ground,’" said Anthony Spanley of Starke County.

The Starke County Sheriff's Department only reported about 4 slide offs with no major injuries.

A number that could have been much higher if road crews hit the streets any later.

The county sent 16 plows out at about 5 a.m. and continued plowing until 2 p.m. to ensure safe roads overnight.

"They're out working on their roads getting things cleaned up so there won't be much work tomorrow,” said Ritzler.

Aside from a little bit of cleanup on Tuesday, both road crews and residents are hoping the plows can stay away for good.