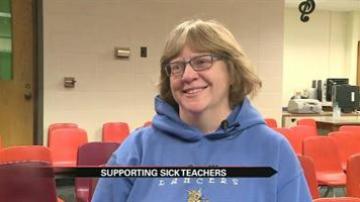 LAKEVILLE, Ind.-- The LaVille community came together in a big way Friday night for two teachers who have struggled with their health recently. The school's PTO put together a spaghetti benefit dinner and basketball game as a fundraiser to help them.

Lisa Head is a music teacher. She had been teaching at LaVille Elementary for 28 years until last March, when she had a stroke. Head soon learned that she has a genetic disorder.

“This gene causes a huge increased risk of a heart attack, stroke, vascular problems, cancers, it’s just not a good thing. All of my family that’s had this, they all presented it as a stroke and they all were misdiagnosed and they all passed away,” Head said.

The people who know her best describe Head as caring and unselfish, always putting the needs of everyone else before her own. Especially those of her children.

“She just adopted three little boys so it’s just so wonderful that she reaches out and helps others and she usually helps others more than herself,” LaVille 5th-grade teacher Mary Lynn Holderread said.

But on Friday night, they said it is their turn to help Head.

“She is a single mom, on a single income, so it will really help her a lot especially with medical bills and with the boys that she’s raising,” Holderread said.

Head has come a long way since her stroke in March. She is now able to walk again on her own, and although she still has trouble with her speech, she said seeing her friends and neighbors rally around her has given her hope.

“It’s just a help in so many ways. It’s mostly a help to the spirit. It’s touching. It brings me to tears a lot of the time,” Head said.

The LaVille Elementary PTO raised $5,700 for Head and teacher Paul Davis, who recently underwent a kidney transplant. $1,000 was raised for Davis' donor, Audra Gaines, a parent of one of LaVille's students.