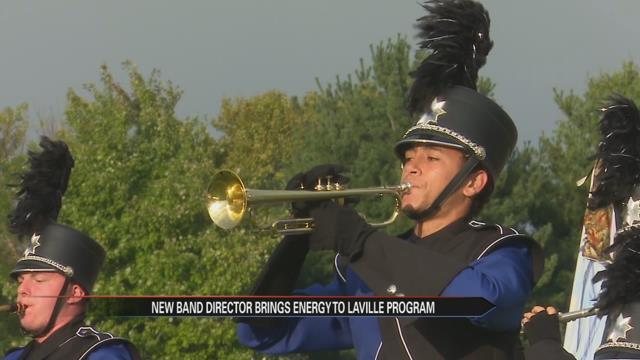 LaVille High School’s youngest band director ever is revitalizing the marching band program. They competed in their second competition in 25 years at Plymouth High School Saturday.

“They have a new band director. This is the second year for him. Mr. Lieto. He’s a young guy,” said one LaVille band parent Alan Kinney.

“But he’s brought a lot of excitement into the program,” said Kinney.

“I think that being young, I have a lot of energy, a lot of passion, and that energy is infectious,” said LaVille’s new band director Nick Lieto.

And he’s energizing LaVille High School’s marching band program by entering the band back into competition for the first time in 25 years.

That’s as long as their new director has been alive.

“I just felt like we were the only one that was not competing in the area, and it’s really a disservice to the kids that they didn’t get to experience this,” said Lieto.

“Having the competitive aspect in it really allows me to play better, and I think a lot of the other band members agree that it really just feels good competing instead of just playing for our own enjoyment,” said a LaVille band senior Tanner Kinney.

Tanner’s dad says he thinks it’s good for the community, too.

“To actually see them compete with other bands from around the area, it gives them something to look forward to,” said Tanner’s dad, Alan.

Students hope this excitement will help the program in the long run.

“Hopefully the school will start giving us more support if we start doing well in competitions,” said Tanner.