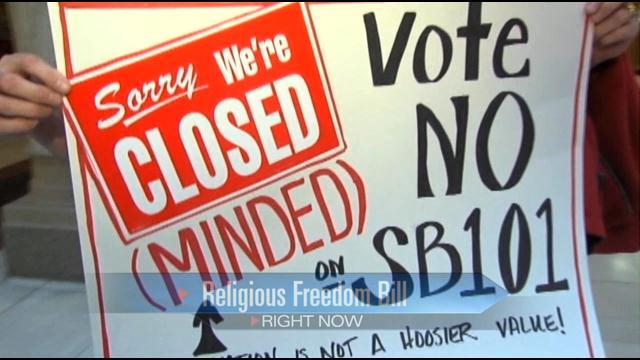 A controversial senate bill centered on businesses and religious protection is one step closer to becoming state law.

After hearing over four hours of testimony from constituents, businesses and non-profit organizations, the House Judiciary Committee approved the Religious Freedom Restoration Act (RFRA) with a nine to four vote.

The RFRA is a bill aimed at preventing laws that burden a person's right to exercise freedom of religion.

It became federal law in 1993 but only 19 states have RFRA laws enacted.

Indiana is one of 10 states considering the bill.

“I think it's time for Indiana to join those other states in signifying how important it is that we protect religious freedom in our state,” said Representative Timothy Wesco, the primary sponsor of the bill.

But some say this bill could cause some businesses to close their doors to the LGBT community.

Small business owners in states like Oregon and New Mexico have been the on the losing end of lawsuits following refusal to serve the LGBT community.

Hobby Lobby found itself facing similar consequences when the company refused to provide contraception to its employees under the Affordable Care Act but prevailed due to protection of the federal RFRA law.

They are looking to protect Michiana businesses.

And protecting businesses in Michiana towns like Osceola is top priority to Rep. Wesco.

He says religious protection for his constituents and all of Indiana is the reason he sponsored the bill and he doesn't foresee businesses abusing the law.

“This type of legislation has been in existence for over 20 years and not a single case could be cited in any of the 30 states or at the federal level where this strict standard of the Religious Freedom Restoration Act has resulted in discrimination anywhere,” said Rep. Wesco.

The problem is, not all businesses are on board.

The non-profit Open for Service believes it gives businesses the right to discriminate against their customers.

The organization looks to provide a database of Indiana businesses that oppose the bill and are willing to take away the choice from companies and give it to customers.

“If that means that a business is not willing to provide things for everybody then fine,” said Josh Driver, founder of Open for Service. “I will present other options for them to go to and we'll just let the market make the decision.”

Businesses that join Open for Service's campaign can purchase a door sticker signifying their opposition to SB 101.

In a matter of days, Driver said he received an enormous response from businesses.

Over 100 businesses purchased a sticker and were added to the database and Driver hopes one day Open for Service can open its services across the country.

“The momentum is there,” said Driver. “Hopefully I can keep up with the demand and hopefully we can expand.”

Aldridge Insurance was the first business in South Bend to support Open for Service.

The owners say they refuse to support a law that could encourage discriminatory practices.

“Why would you turn a person away in today's society?” said Alice Aldridge, co-owner of Aldridge Insurance. “We're not in the 1900's.”

Aldridge says she wants use the sticker as a symbol of diversity and educate her customers as well.

“For some people they won't even know what it is and I will inform them what it is,” she said. “We don't discriminate.”