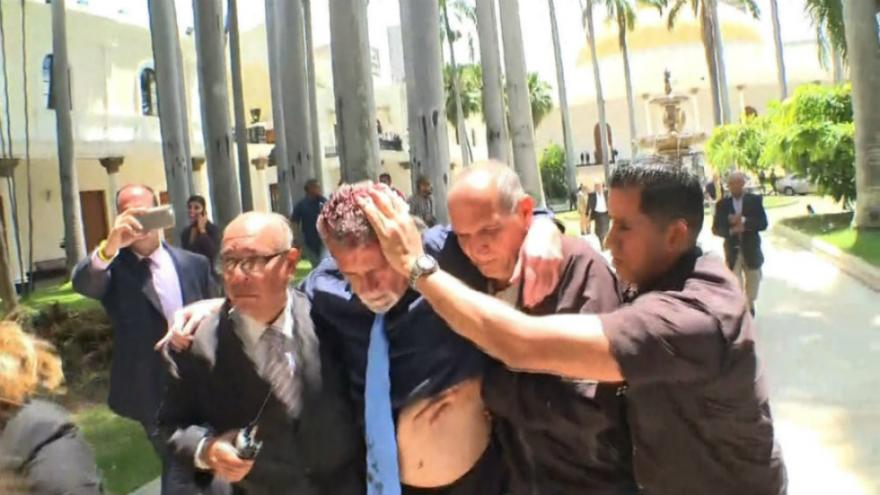 The Independence Day clashes are the latest outbreak of violence in a country struggling with a deepening economic crisis and sometimes bloody street protests calling for a change of government.

Inside, blood stained the floors and walls of the assembly hall as wounded lawmakers were tended to by colleagues.

At least seven legislative employees and five lawmakers have been injured, according to National Assembly President Julio Borges.

Journalists inside the assembly building said that they had also been assaulted.

Before ending a military parade on the 206th anniversary of the signing of the Declaration of Independence, Maduro condemned the violence and said "strange facts always occur with the opposition." He also ordered an investigation.

"I will never be complicit to any act of violence," he said. "I want peace for Venezuela. I do not accept violence from anyone."

Lawmakers pledge vote will go ahead

Despite the violence, lawmakers vowed to proceed with a scheduled session to discuss an unofficial plebiscite -- a national vote that would be a move toward an election seeking to oust Maduro. National Assembly vice president and opposition leader Freddy Guevara told state-run TV station Capitolio that the session would go ahead as planned Wednesday.

The July 16 plebiscite will pose questions on the level of confidence in Maduro and seek public input on his rewriting of Venezuela's constitution.

Guevara, told CNN Español that lawmakers Armando Armas and Américo de Grazia were injured in the confrontation with Maduro loyalists. Lawmakers Nora Brancho, Luis Carlos Padilla and Leonardo Regnault were also injured, according to a Twitter post from the assembly.

Assembly member Armando Armas, his head and white-shirt bloodied, posted a video on Twitter with the message: "We were elected to defend the country. Today, July 5th, barbarity wants to impose itself before civility. Down with the dictatorship!"

"We will defend Venezuela at all costs, even with our lives," he said.

In April, amid widespread criticism, the Supreme Court revoked a ruling transferring all National Assembly powers to the court, which is stacked with government loyalists. The opposition had called the move a coup.

The latest assault on the National Assembly follows several tumultuous days for the troubled nation. Police officer Oscar Perez last week stole a government helicopter with a team of accomplices, flew over the Supreme Court, dropped grenades, fired shots and then flew around Caracas for about two hours.

No one at the Supreme Court was injured and military forces did nothing to intervene -- even though Perez was flying in plain sight. Government critics said it was a stunt orchestrated by Maduro to justify using a heavier hand on protesters. Maduro condemned the attack and denied any involvement.

On Wednesday, Perez appeared in a video saying the goal of his mission was achieved, which was to damage the Justice Ministry and Supreme court without causing collateral damage.

"We are not assassins, like you, Mr. Nicolas Maduro," he said.

"Once again we are in Caracas, ready and willing to continue our struggle for the liberation of our country," Perez said in the video, wearing a military uniform, with a Venezuelan flag and a rifle as a backdrop.

Maduro last week also clashed with his attorney general, Luisa Ortega, who broke government ranks this spring and has lambasted Maduro for alleged human rights abuses. The Maduro-backed Supreme Court froze Ortega's assets and ordered her not to leave the country as she may face a trial.

"I have committed no crime nor errors and I am not going to submit to this unconstitutional and illegitimate court," Ortega said at a news conference Tuesday, explaining why she did not attend a Supreme Court hearing.

More than 80 have died in street violence

Opposition lawmakers were physically pushed around last week at the National Assembly by the national guard, which is controlled by Maduro.

Near daily clashes between government forces and protesters have paralyzed the country for months. More than 80 people have died since the beginning of this latest round of civil unrest, according to the attorney general's office.

With unemployment set to surpass 25% this year and severe food shortages, some Venezuelans have opted to leave the country.

They are crossing the border into Colombia after enduring months without basics such as milk, eggs, flour, soap and toilet paper.

Venezuelans are also struggling with a shortage of medicine, and some are also taking their sick to Colombian hospitals.

Many are leaving the country for good. Venezuelans are the top asylum seekers in the United States. More than 14,700 Venezuelans sought asylum in the 2016 fiscal year, up 160% compared with 2015 when 5,605 Venezuelans applied for asylum.

The government has been accused of intimidating and restricting the media, taking CNN en Español off the air. It tightly controls visas for foreign journalists including CNN, arresting those who report from inside the country without proper permits.