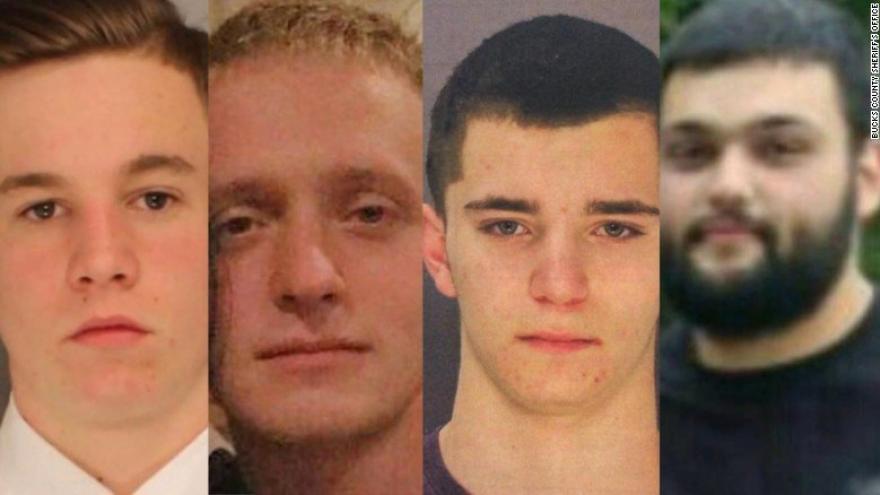 (CNN) -- The four young Pennsylvania men who went missing last week were lured to a remote property with promises of marijuana, shot and killed, and then buried deep underground, according to the Bucks County, Pennsylvania, district attorney.

Two men were charged Friday with multiple counts of homicide and other crimes in connection with their deaths in a disturbing case that featured a massive, multi-agency investigation.

The judge entered not guilty pleas on their behalf and they are being held without bail.

The charges relate to the killings of Jimi Patrick, Thomas Meo, Mark Sturgis and Dean Finocchiaro, who went missing within miles of each other in Bucks County.

All four men were discovered buried deep underground on the sprawling property owned by Dinardo's parents in Solebury Township, according to a statement from the district attorney's office.

Investigators found the bodies of Finocchiaro, Meo and Sturgis in a 12½-foot-deep grave Wednesday, according to the complaint. Patrick's body was found in a separate grave late Thursday.

Dinardo, who was arrested for theft on Wednesday, confessed to his involvement in the murders the next day, his attorney Paul Lang said. In exchange for that confession, prosecutors agreed not to seek the death penalty against him.

Bucks County District Attorney Matthew Weintraub said that if he hadn't made the deal, "we'd still be looking" for Jimi Patrick's body, which was buried about half of a mile away from the other grave.

"I can't predict the future, but that is what I believe," Weintraub said. "I don't know what convinced him (to confess). I'd like to think that he wanted to help us get these boys home."

The families of the victims agreed to take the death penalty off the table in exchange for his confession, according to Bucks County Assistant District Attorney Gregg Shore.

Dinardo and Kratz are cousins, the criminal complaint states. Meo and Sturgis were friends, but the four victims were only connected insofar as they agreed to meet Dinardo to buy marijuana, according to the affidavit.

Weintraub said he believed Dinardo and Kratz are the only ones involved in the killings, but said more information could change that position.

All shot and killed

In his confession, Dinardo detailed a series of shocking killings with no clear motive. Kratz spoke to investigators on Thursday night.

On July 5, Dinardo agreed to sell Patrick four pounds of marijuana for $8,000, and Dinardo drove and picked Patrick up and brought him back to the sprawling property, according to the affidavit.

When they arrived, Patrick said he only had $800, and Dinardo agreed to sell him a shotgun for that amount. Dinardo then took him to a remote part of the property, gave him a shotgun, and then shot and killed him with a 22 caliber rifle, according to the affidavit.

Dinardo allegedly used a backhoe to dig a 6-foot-deep hole and bury him, the affidavit states.

The three of them drove back to Dinardo's large property. There, Kratz shot Finocchiaro in the head with a handgun that belonged to Dinardo's mother, Dinardo said, according to the criminal complaint. However, Kratz told police that Dinardo was the one who shot Finocchiaro.

They then placed him in a metal tank that Dinardo referred to as the pig roaster, according to the criminal complaint.

Afterward, Dinardo agreed to sell marijuana to Thomas Meo that same night, and he picked up Meo and his friend Mark Sturgis and drove them back to his property, the affidavit states.

Dinardo told police that when they exited the property he shot Meo in the back, who fell to the ground screaming. Sturgis started to run away, and Dinardo shot Sturgis, killing him, the affidavit states.

Dinardo allegedly poured gasoline into the tank and lit it, the complaint says.

"There was an attempt to burn the bodies, to deface them, to obliterate them, but I don't believe that that was successful," Weintraub said.

Dinardo and Kratz returned to the property the next afternoon and used the backhoe to dig a hole and bury Finocchiaro, Meo and Sturgis, the complaint says.

Dinardo's parents own a construction and cement company called Cosan LLC. An attorney for the family, Fortunato Perri Jr., said in a statement that they were not connected to the alleged murders.

Cosmo Dinardo was first arrested on Monday for an unrelated firearms charge that dates to February. He allegedly possessed a 20-gauge shotgun, but was not legally allowed to possess the firearm because he had a mental illness and had been involuntarily committed to a mental institution for inpatient care, according to court documents.

The original charge was dismissed by a judge in May, and the Bucks County district attorney's office authorized police to reinstate and refile that charge on June 21. But he was not arrested again on the charge until July 10, days after the men went missing.

Dinardo was released on bail on Tuesday when his father paid 10% of the $1 million bail in cash.

He was arrested again on Wednesday for allegedly stealing and attempting to sell Meo's vehicle the day after Meo was reported missing. Dinardo's bail was set at $5 million after the district attorney argued that he was a flight risk.

Kratz, too, has several criminal arrests. Most recently, he was charged in February with burglary, conspiracy, criminal trespassing, theft, receiving stolen property and criminal mischief, according to court documents. He was out on bail at the time of the murders.

Patrick attended Loyola University in Maryland on a full scholarship and was majoring in business, his grandparents said in a statement.

Finocchiaro, 19, is from Middletown Township in Bucks County. Meo, 21, and Sturgis, 22, were friends and coworkers.