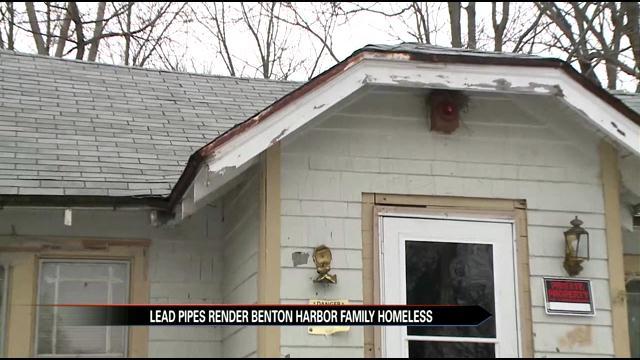 Lead pipes continue to be a problem for Benton Harbor homeowners. One family signed a land contract in October, then found out the home didn't have water and would need to pay thousands of dollars to exchange their lead pipes for copper ones.

The city manager said if a home was built before the 1970s there's probably lead pipes underground.

Jon Romhilt recently signed a land contract at 785 Lasalle Street in Benton Harbor. When the city came to turn the water on, they found lead pipes, extracted them, and condemned the house a few days later.

Romhilt and  his wife Danielle have been filling up water jugs and bringing them to the home.

Romhilt said, “I've been hauling water every day so that we can flush the toilet and wash dishes.”

Romhilt didn't know about the safety hazard underground when he agreed to buy the home.

Romhilt said, “Paid for the water meter and the same day the gentleman came out and he told me sir I can't turn your water on, because I cut the pipe here and across the street.”

The property owner said the home has been in her family for 20 years, and this is a shock to her.

Romhilt said he has a 3-year-old son who is staying with a relative since they don't have running water. He said he is on disability and social security.

City manager Darwin Watson said homeowners need to have an inspection done before they move in.

Watson said, “What happens is a lot of times when we have to go out and do work on plumbing that is in the ground that leads into the homes, we don't know if it's copper, if it's lead, or what it is under the ground.”

If city workers find lead pipe, they are obligated to remove it immediately. Watson advises that families seek quotes from multiple contractors. He believes the $7,500 figure that Romhilt was quoted is a bit steep.

Watson said, “That's a little bit elevated. I don't know exactly what that entails, or why it would be $7,500 but typically it's not that absorbent, so there may be something more to it than that, there may be some shoring up of the infrastructure that's there along with the wall of the building.”

If you would like to donate to Jon and Danielle Romhilt, or if you know of a program that can help them, they can be reached at 269-369-6970.