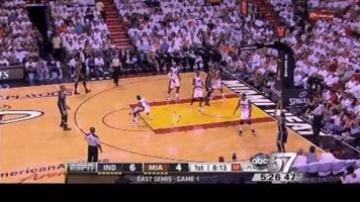 MIAMI, Fla. -- Lebron James and the rest of the Miami Heat were in action against the Indiana Pacers in the opening game of the Eastern Conference semifinal Sunday.

The game started off with the Pacers taking an early lead 9-4, but then Dewayne Wade throws it to James for the alley-oop.

The Heat ended up coming back and winning 95-86.

Chris Bosh went out in the middle of the game with a groin injury. No word on whether he'll be playing in Game 2.

Prior to Sunday’s game, Lebron James was honored with his third MVP award. James won two MVP awards when he played for the Cleveland Cavaliers.