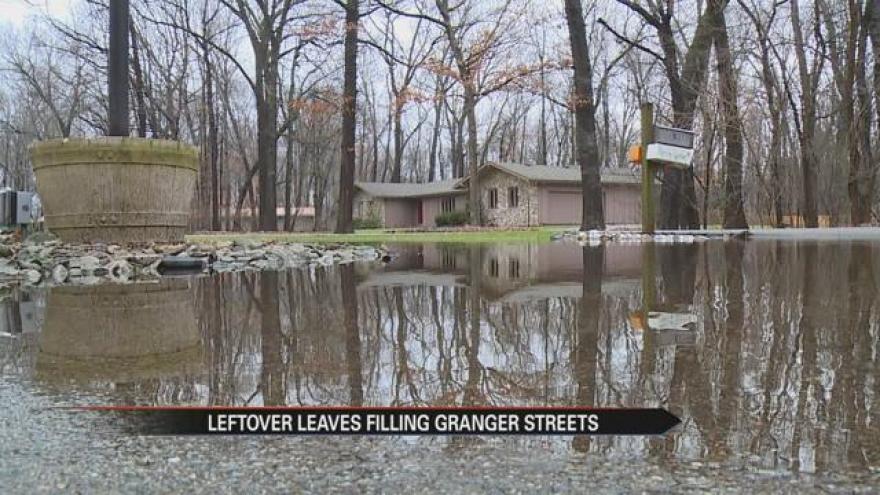 People from several Granger neighborhoods say their driveways and the streets flooded when the leaves set aside for collection clogged the drains during Tuesday’s heavy rain.

The leftover leaves on the streets have been an on-going issue in several neighborhoods including Partridge Woods, Sherwood Forest and Park Forest.

While the company’s website explains weather could cause delays in pick-up, it does not indicate when it will happen.

A progress map on the site shows most areas have already been completed. But people in those areas still have piles of leaves on their streets months later.

“It’s quite frustrating that we have to make it through the winter with this mess,” said Sherwood Forest homeowner Pamela Holt.

Holt says complaints to GreenWorld haven’t done any good. She says it's hard to get an answer, and was told the leaves may not be collected until Easter.

Neighbor Bill King says he got so fed up with waiting; he hired someone to clean up the leaves outside of his house.

Still, the leaves throughout his neighborhood are a safety concern for him and others who like to go for walks.

“The piles create a one-lane road. When I’m walking I have to stand off the street so the car can go by,” said King.

Patridge Woods homeowner Shari Keller lives near an intersection with three storm drains, all were clogged with leaves when it rained Tuesday afternoon.

Keller says it was incredibly difficult for her and other drivers to get through the large puddles.

Across the street, Chris Scheetz said his young daughter had an especially hard time getting on the school bus.

“I think I can speak for everyone in the neighborhood, we just want the leaves picked up that’s all. I mean that will solve all of our issues,” said Scheetz.

Keller contacted the county, who stepped in to unclog the drains before the afternoon bus routes.

She worries that was just a quick fix.