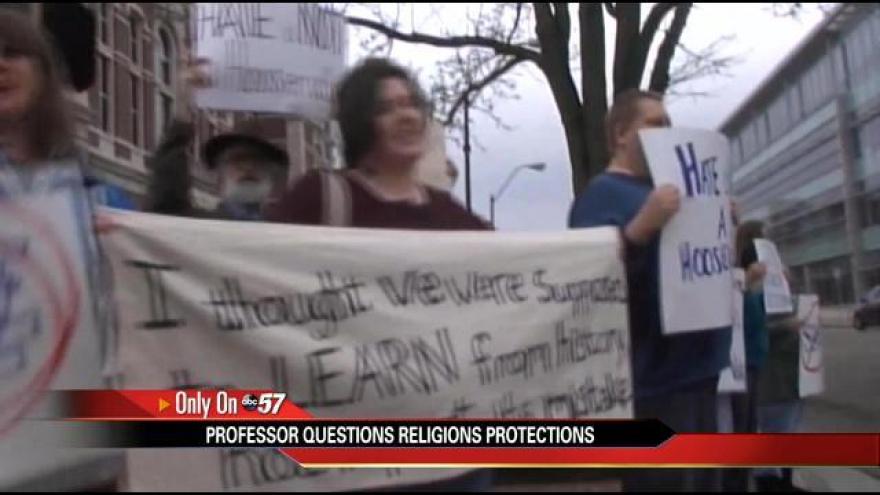 Doug Laycock a law professor with the University of Virginia, spoke to ABC 57 Wednesday about the Religious Freedom Restoration Act. Laycock says gays and lesbians have never been protected in the state of Indiana.

“Outside of Indianapolis, Bloomington and South Bend, there are no laws to protect gays and lesbians from discrimination, that needs to be fixed. RFRA has nothing to do with it," said Laycock.

Should more have been done before this law was passed?

There are nineteen other states that have religious freedom laws, so why is Indiana under the national microscope?

"To protect individuals who are not considered in the legislative process," said Ravich.

Critics of this law say it could open the door for members of the LGBT community to be discriminated against.

But do religious freedom laws do this? Legal experts say, no.

Ravich says it's more so the fact that Indiana does not have a statewide anti-discrimination law to protect the LGBT community.

"If there was a civil rights protection for the LGBT community that would really go a long way to protecting this sort of discrimination," said Ravich.

So what is RFRA really designed to do ?

Ravich says, "They are really designed to protect for example a Muslim who has to wear a hijab or a Jewish person who needs to take Saturday off or a Seventh Day Adventist."

Ravich says Indiana law protects for profit business and he sees this as another issue.

"It's one thing to say that a church can make decisions regarding sexual orientation or an individual religious person its another thing entirely to say that a business who serves the general public is allowed to discriminate, that's really the problem with the Indiana law," said Ravich.

Many law professors participated in writing a letter that weighed in on the law before it was passed, the main proprietor of the letter says the reason they did it was in part quote, "Because the bill was being attacked with many of the same misconceptions and outright falsehoods that re fueling the current hysteria in Indiana."