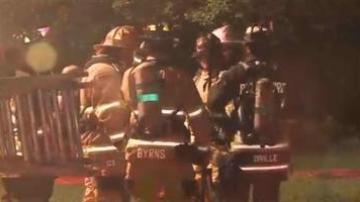 PENN TOWNSHIP, Ind. -- A legally blind, elderly Penn Township man said he's lucky to be alive after his home on Birchwood Drive caught on fire while he was asleep.

Firefighters said the blaze started in the attic around 2 a.m. Monday.

The homeowner who neighbors say is his late 70s or 80s and a retired teacher said he woke up to the sound of his smoke alarm and walked out of his bedroom, went outside, and started screaming for help.

Eventually, he got someone to call the fire department.

According the Penn Township Assistant Fire Chief Brian Mayo, a crew was sent to the home from just down the street to knockout the majority of the fire.

Mayo said the man is also legally blind and was lucky he got out of the home when he did.

"The homeowner is OK,” said Mayo. “We actually had the Red Cross out here to help him out being that he's by himself."

The homeowners neighbors along with the help of the Red Cross helped him find a place to stay the rest of the night. He said he's hoping to get back into his home as soon as possible.