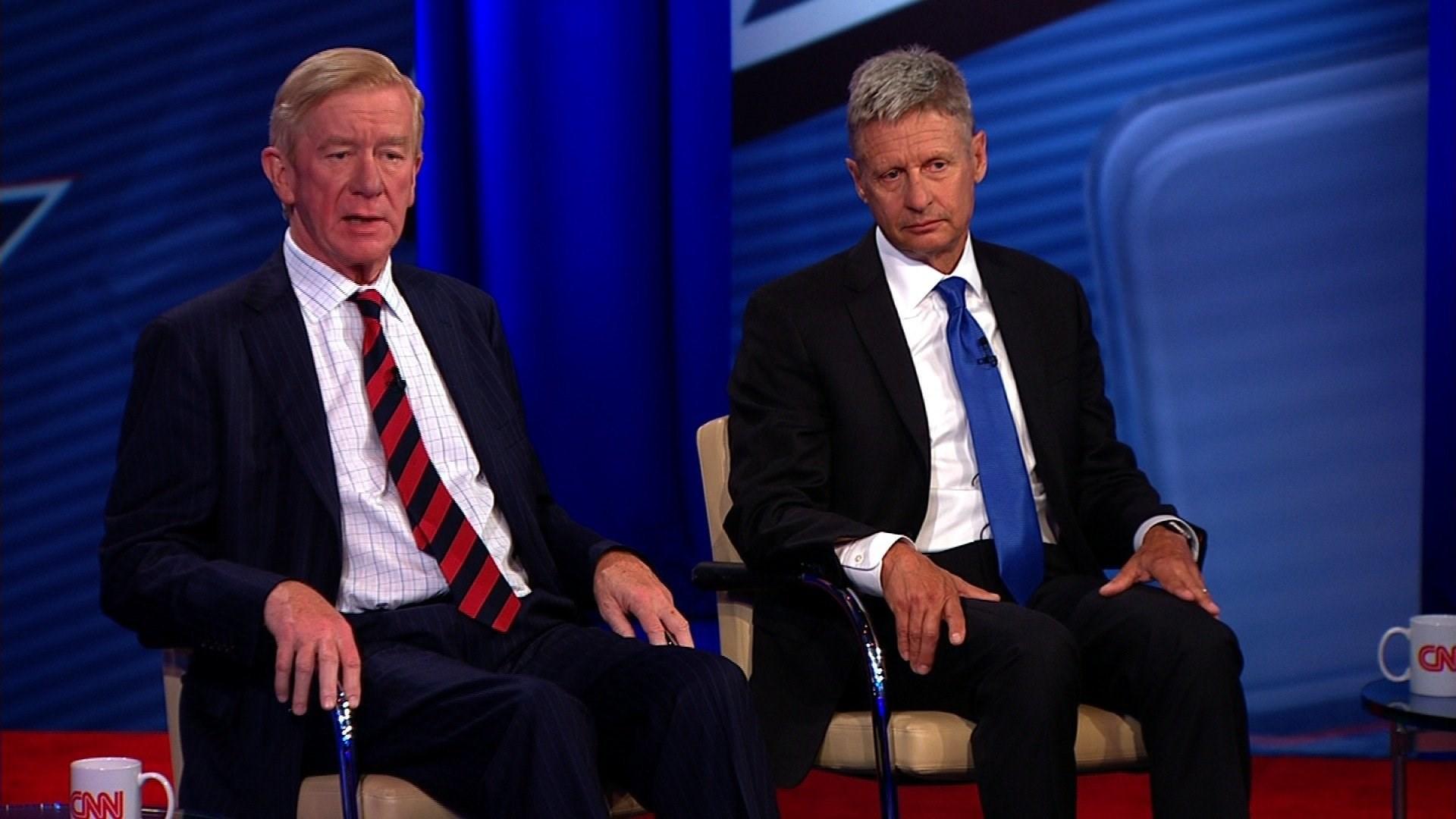 "If either (Donald) Trump or (Hillary) Clinton are elected, things will be more polarized than ever," Johnson said at a CNN town hall, adding that his role was "calling out both sides."

The event, moderated by Anderson Cooper, comes as both major party conventions have wrapped up and Republican nominee Trump has become embroiled in yet another interparty fight -- this time over his criticism of the family of a slain US Muslim soldier.

Johnson and Weld have never been shy about attacking Trump and the opening minutes of the town hall were no exception.

"He's a showman. He's a pied piper. He's the music man," Weld said of Trump. "More recently, it's gotten more serious and the noun that comes to my mind is 'a screw loose.' "

Weld added that he thought Trump "should consider some other line of work, like anything other than president of the United States."

"I don't think America has ever been better," Johnson said.

Pulling no punches on Clinton, Johnson questioned the Democratic nominee's integrity by casting her as "beholden."

"It's just not coincidence, I don't think, that Bill Clinton and Hillary both are making huge amounts of money with these speaking fees," Johnson said.

Specifically, he pointed out apparent conflicts of interest between the work of the Clinton Foundation and Clinton's work at the State Department. He said her work at State "smacks of pay-to-play."

Ellis Jeter, now a Columbia University Student, spoke of how he lost his job and student housing at a private religious school after he was outed as gay, and he asked the governors what they believed the role of government should be to protect people's civil liberties.

Weld pointed to his actions as governor of Massachusetts in the 1990s to expand basic protections for LGBT people.

But Johnson reiterated a stance he holds that is somewhat at odds with many Libertarians. He said he did not support laws that would, for example, allow a baker to refuse to sell a cake for a gay couple on religious grounds.

"I fear that under the guise of religious liberty, the LGBT community is being discriminated against," Johnson said. "I don't want to support discrimination in any form whatsoever."

But on the matter of judicial appointments, Johnson and Weld demurred. Both said they did not want to put forward a litmus test for potential judges.

Hitting a topic very much within Johnson's wheelhouse, the discussion turned briefly to the topic of marijuana. The Libertarian nominee is a former CEO of a legal cannabis company and has admitted to indulging in edible pot products in the recent past.

"What we need to do is de-schedule Marijuana as a Class 1 narcotic. There needs to be research and development on marijuana, and in no way are we supporting kids being able to use marijuana," he said.

In one of the strongest moments of the night, Shetamia Taylor, who was wounded during the Dallas police ambush last month, asked Johnson about the "Black Lives Matter" movement. Johnson offered a mea culpa and pledged to work now that he had gained a heightened sense of racial discrimination.

"My head's been in the sand on this," Johnson said. "I think we've all had our heads in the sand, and let's wake up. This discrimination does exist."

Historically, third-party support fades after the major party conventions, but this election has proven time and time again that historical trends do not necessarily apply.

Johnson's stated goal is to raise his profile enough to secure an invitation to the presidential debates with Trump and Clinton. To do this, he needs to reach an average of at least 15% support in national polls.

So far, he has generally reached between 6%-13% support nationally, with the latest CNN/ORC poll finding him at 9%. The co-chair of the Commission on Presidential Debates -- which Johnson and Green Party candidate Jill Stein have sued -- told CNBC on Tuesday that if Johnson were to miss the 15% threshold by a very narrow margin, the commission would consider adding him to the stage.

Since emerging from the Libertarian Party's convention in May, Johnson, the former governor of New Mexico, and Weld, a former Massachusetts chief executive, have relied largely on doing a considerable amount of press to get their names out there and their poll numbers up.

Going forward, the Libertarian ticket can also expect the help of several disaffected Republicans hoping to bolster this third-party bid.

"Like a lot of voters this cycle, I'm extremely dissatisfied with the choices that are being offered by the major parties," Liz Mair, co-founder of the newly minted group Republicans for Johnson/Weld 2016, said Wednesday on CNN's "At This Hour."

Mair, who previously worked for Wisconsin Gov. Scott Walker's presidential campaign, said the group would work to legitimize Johnson in the eyes of Republicans.

"What this group aims to do is make sure that people understand that voting for Gary Johnson is a viable option," Mair said.

Johnson also ran as a Libertarian in 2012 but he failed to break out, earning slightly more than 1 million votes -- .99% of the popular vote. This time around, the Libertarian Party has said it expects to do much better, given the unprecedented attention it has received in the face of historic unfavorability ratings for Trump and Clinton.

The CNN/ORC poll released Tuesday found the majority of registered voters held unfavorable views of Trump and Clinton by 61% and 54% respectively.