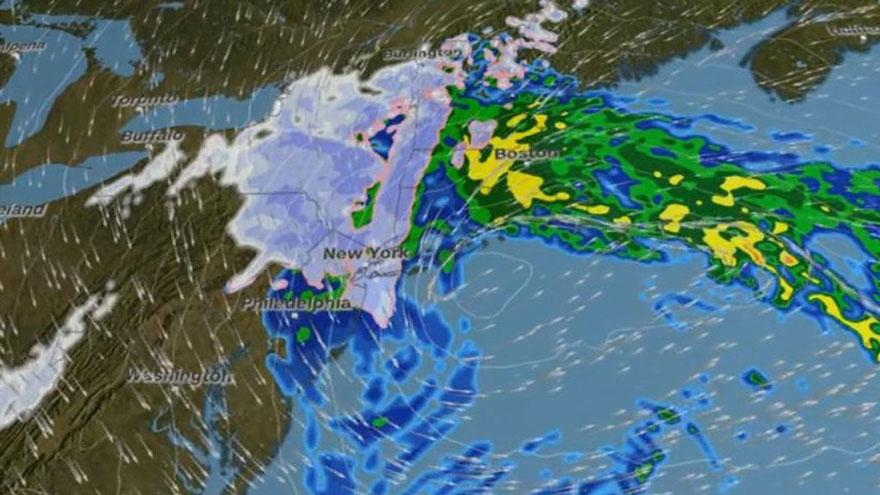 (CNN) -- A nor'easter hammered the East Coast on Friday with a ferocious mix of howling winds, drenching rain, some snow and surging waves as it carried the threat of morphing into a "bomb cyclone."

"Take this storm seriously!" the National Weather Service in Boston warned via Twitter. "This is a LIFE & DEATH situation for those living along the coast, especially those ocean-exposed shorelines."

The blustery, wet barrage -- with about 80 million people in its path, including more than 22 million people under a coastal flood warning --was packing wind gusts exceeding 50 miles per hour and knocking out power, flooding neighborhoods and walloping homes up and down the Atlantic coast.

More than a thousand US flights have been canceled, including hundreds at the busiest Northeast airports. One plane's bumpy descent into the Washington area left passengers and crew nauseated, according to a pilot's report tweeted by the Aviation Weather Center.

Like the nor'easter in January, this storm could undergo bombogenesis -- or become a "bomb cyclone" -- by dropping at least 24 millibars of atmospheric pressure in 24 hours. Some forecasters predict a sudden pressure plummet Friday evening off the Atlantic coast.

People across the region skipped work Friday to hunker down.

In the Washington area, federal offices didn't open Friday, schools closed and trash collection was suspended. As the high tide advanced in New England, authorities warned coastal residents to be ready to evacuate.

"This storm is going to be worse," she told WCVB, "because it's going over three high tides."

Here's what to expect:

Boston Harbor, which has only seen tides above 15 feet twice -- in 1978 and in January, during the bomb cyclone -- is expected to see the tide at that level three times during this storm, CNN meteorologist Judson Jones said.

The storm is moving slowly, and the wind, rain and flood effects will linger for days. Parts of eastern Long Island and eastern Massachusetts could get up to 5 inches of rain through Saturday. The rest of the region could see 2 to 4 inches of rain.

"Mostly minor and some moderate flooding is expected in southern New England and New York on Friday and Saturday," the National Weather Service said.

"If you are told to evacuate from a flooded area, GO!" the New Jersey Office of Emergency Management said.

Winds will be so ferocious that the Port Authority of New York and New Jersey is securing cranes at a LaGuardia Airport construction project. It's also making plans to use buses if trains at JFK or Newark airports must stop because of wind.

In Boston, high wind warnings are in effect from Friday to Saturday morning, when winds could whip up to 65 mph. New Jersey officials say high winds may affect trees and power lines.

In Washington, wind gusts exceeding 50 and 60 mph have been reported at airports. Officials in the nation's capital activated a hypothermia alert and urged homeless residents to take shelter.

Strong winds will affect states from South Carolina to Maine.

More than 2,000 flights within, into or out of the United States on Friday have been canceled, the flight-tracking website FlightAware.com posted Friday. The highest numbers of cancellations are at Logan International in Boston, Philadelphia International, and the three major New York-area airports -- LaGuardia, Newark and JFK.

Any snow that falls will be heavy and wet, likely to bring down trees and power lines, and cause power outages.

Major cities in the Northeast, such as Philadelphia and New York, may get a wintry mix of snow, rain and sleet, with no snow accumulation forecast.

"Do not ride out the storm if you are told to evacuate," Baker said.

"As the saying goes, March is coming in like a lion, and we are preparing for heavy snow, rain, and flooding across New York this weekend," he said. "I am asking for everyone to ... take the necessary precautions to prepare for conditions."