Life inside the Philippines' most overcrowded jail 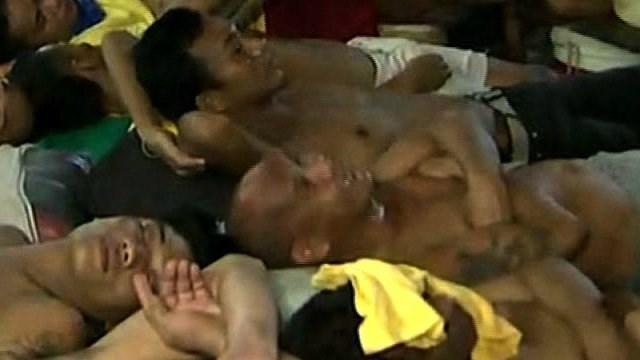 MANILA, Philippines (CNN) -- In an unassuming Quezon City neighborhood, across from a municipal library and around the corner from a police station stands the local jail.

A short ride from Manila -- depending on traffic -- the jail isn't an imposing building, or even a particularly large one. Its total floor area is a shade over 30,000 square feet.

More than 4,000 inmates -- and counting -- live cheek by jowl in what has to be one of the most densely populated corners of the Philippines.

It's always been packed, guards say, but recently the number of inmates has spiked.

Critics say this overcrowding is a predictable effect of President Rodrigo Duterte's war on drugs -- a crackdown the pugnacious new leader promised in the campaign that propelled him into office.

Conditions inside are astounding. Every available space is crammed with yellow T-shirted humanity. The men here -- and almost 60% are in for drug offenses -- spend the days sitting, squatting and standing in the unrelenting, suffocating Manila heat.

Their numbers are climbing relentlessly. At the beginning of the year, a little under 3,600 was incarcerated.

In the seven weeks since Duterte took office and charged his No. 1 cop, Ronald Dela Rosa, with cleaning up the country, that number has risen to 4,053.

The Quezon City Jail was built in 1953, originally to house 800 people, according to the country's Bureau of Jail Management and Penology standards. The United Nations says it should house no more than 278.

Dela Rosa earlier told CNN that the criminals in the jails and prisons would just have to squeeze in, gesturing by pulling in his shoulders and arms.

Inmates are woken at 5 a.m. before undergoing a head count -- no easy task when you have 4,000-plus men crammed into crumbling, ramshackle cells.

'Safer in here than out on the streets'

Alex Beltran, a 29-year-old temp worker, has been here for a month and blames Duterte's crackdown for his imprisonment. "The food is terrible," he says. "And it's hard to find a space to sleep, especially when it rains."

Life inside is "harder for the new guys," he says. Fellow inmate Romeo Payhoi, 38, is another newcomer, and while he says he was scared coming in, it hasn't been as bad as he anticipated, just cramped and lacking any privacy.

At any rate, he adds, he feels "safer in here than out on the streets," where "the cops could kill you."

Many inmates could go home but can't afford the bail, which can be as low as 4,000 to 6,000 pesos ($86 to $129), according to Joey Doguiles, the jail's senior inspector and chief of operations. A top police chief, when asked what officials did to prepare for the crackdown, said the threat from drugs was so great that there was no time to expand the facility. That would have to come later.

Outside the jail as many as 700 relatives of inmates wait patiently in the still morning air to go in to see their brothers, husbands and sons. They'll be waiting for hours before adding to the crush inside -- one guard says that there isn't a specific visiting room; visitors mingle with prisoners, marked with ink stamp to denote their freedom.

A rigorous search of those coming from the outside keeps the amount of contraband to a minimum, Doguiles says. But it's still a jail, he shrugs, suggesting that drugs and other illegal goods do find their way in. The main drug here -- as it is across the Philippines -- is shabu, the local name for meth.

Inside the dormitories -- affectionately called barangays, a Filipino name for neighborhoods -- the men are left to their own devices to find somewhere to sleep. Towels, threadbare curtains and even chipped plywood boards are put up to maintain some semblance of privacy, but it's impossible in such a cramped space.

Bunks are stacked at least three high, and inmates have even crawled under these rickety structures to find a sleeping spot. One sleeps, cocooned, in a hammock suspended from the ceiling.

And they don't even have the comfort of knowing that this is a temporary situation. The court system here works at a snail's pace.

Ameena-Tara Jance visits six days a week to see her husband, who's been here for six years and counting.

He's recovering from a mild stroke, and she says that in the heat some have been known to keel over and die. Her husband is due for another hearing in October, but they both feel there's no end in sight. "There's no justice," she says.

The "mayor" of the second-floor dorms, Ramon Go -- an inmate responsible for marshaling and supervising around 900 of his fellow prisoners -- has been there for 16 years.

He's one of the few who's had his trial -- on murder charges -- after a police raid led to a cop's shooting death. He was tried 2½ years ago -- after almost a decade and a half of waiting -- and is still stuck inside the walls of the jail in Quezon City, waiting for the verdict to come in.

With thousands of arrests made since the beginning of June in the war on drugs, the population of inmates keeps growing.

It's an endless wait, made keener by the fact that the inmates can't know when they might regain their freedom. So they wait, watching daily as more caught up in the crackdown are processed and attempt to eke out a space, and a life, in a jail already breaking at the seams.