Life with a traumatic brain injury 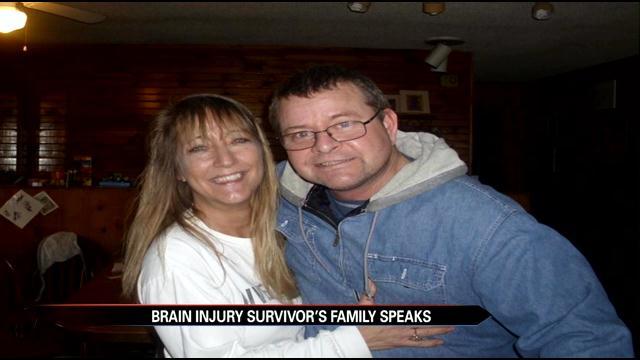 March is Brain Injury Awareness month and it is to help people know that brain injuries are common and how to empathize with people who have a brain injury.

Steven Parrigin was in a serious car accident in the fall of 2010.

This car accident left him with a broken nose, shattered the left side of his face, his right shoulder, clavicle, and arm was broken, as well as all his ribs.

He was in a coma for 63 days and had tubes breathing for him and tubes removing fluid from his body.

It was a day that Steven's wife of more than 30 years Diana Parrigin cannot forget.

She recalled that Steven left for work at around 2:00-2:30 A.M. to go to his job in Michigan where he drove a dump truck.

“He left and I went back to sleep. At around 3 o'clock I got a phone call. I thought it was Steve telling me he had made it to work like he always does. The man on the other line said, 'your husband has been in an auto accident and you need to get down here right away,'” said Diana.

The accident happened on I-94 at mile marker 56.

“The drunk driver rear-ended my husband at 114 miles per hour, which, caused my husband's Jeep to torpedo into the air, spin around a couple of times, and he was ejected from the front seat,” she recalled.

Her husband is no longer able to do the things he used to before the accident. His physical wounds have healed but the internal brain trauma is permanent.

“His short term memory is about 15 minutes, his mental comprehension is that of an eight year old. Everything he could do before, he cannot do anymore.”

Diana is able to pick up her husband on Thursday to bring him home for the weekend; however he has to be continually monitored because their house is not completely safe for him to live there daily.

“To this day he lives in an adult foster care home, almost 5 years later, where he gets 24 hours, 7 days a week care. He needs assistance with everything he does."

He goes through daily physical, occupational, and speech therapy to help with his injury. He has to walk with a walker. His brain also is not able to regulate his body temperature or gauge when he is full from eating.

Each brain injury is unique to the person and no two are alike.

“Some of the things that he and his buddies did when they were about 15-16 years old, he remembers like it was yesterday."

But she said by the end of the day he will be asking several times what happened that morning.

She said they try to help his short term memory by always doing the same things at the same time. It is a continual process of repetition.

“If I quit bringing him home, if we took down all the pictures in his room up there of us, that he would forget about us totally in two weeks."

Everyday is a struggle dealing with this but it is her unwavering love for her family and husband that gets her through.

“If I just gave up we would just lose everything we had here and this is the only normal thing he has that he remembers to come home to," she said.

Since the accident Diana has become involved in different organizations to help raise awareness about brain injuries and how to cope with them.

Once a month she speaks on behalf of the Drunk Driving Victim's Impact Panel.

She also started the Brain Injury and Caregiver Relief Network of Southwest Michigan. To learn more about this, click here.