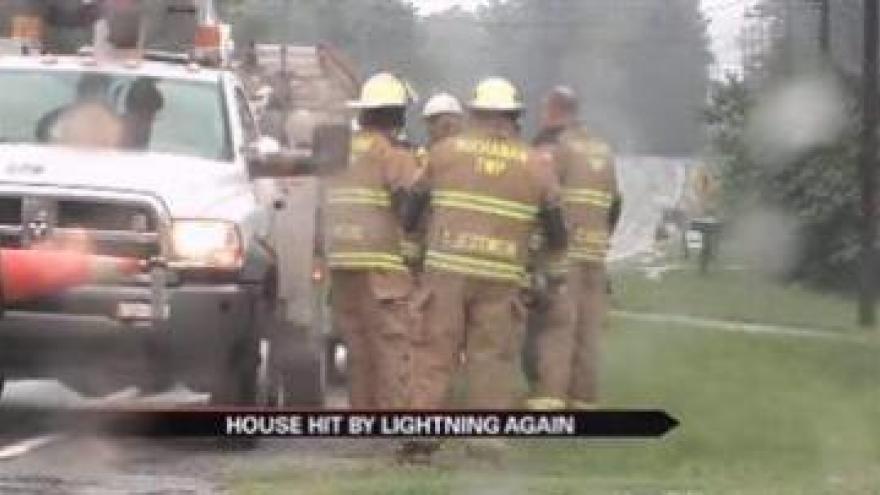 BUCHANAN TWP., Mich. -- A lightning strike in Buchanan Township is causing a lot of stress for one family.

The Buchanan Township Fire Department along with the City of Buchanan responded to a home on Thursday  in the 1600 block of Galien-Buchanan Road because of an electrical  fire.

Fire investigators believe lightning struck an electrical wire outside the family's house and then sent a surge of energy back into the home via the electrical outlets.

Smoke, fire, and sparks were seen coming from their hard wired smoke detectors and an electrical burning smell filled the air.

Now, the Canfield Family might have lost all of their electronics that were plugged in, but last time lightning struck here, they almost lost one of their family members.

Homeowner Doug Canfield said, "I was sitting in the living room and I heard a God awful Boom!" His neighbor Chuck Liska III couldn't help but hear it too! "Sounded like a cannon went of and then a big flash of light. Looked out the window and saw the power wires dangling and called the electric company," he said.

13-year-old Mason Canfield said, "we just got a brand new refrigerator and TV." However at this point the Canfield's aren't sure if their electronics still work after what happened today. Mason alerted his parents to the fact smoke and sparks were pouring out of the fire detectors in their house around 11:15 Thursday morning.

Tim Jesswein, the Buchanan Township Fire Department Chief said, "what we believe happened now is the power line came down on other power lines, gave everything an extra burst of energy and basically just fried their equipment, including the wiring that goes to the smoke alarms."

Mason didn't want to talk about the last time lightening struck at his house. His Dad Doug said it was just a little over two years ago and he doesn't get choked up talking about it because he said he has no memory of the ordeal what so ever.

"July 18th, 2010, I was out back going to unplug my pool because the storm was coming in," said Doug. He may not remember, but his family and neighbors remember vividly. "It was a pretty scary moment when he got hit, he was just laying on the ground, looked like he was dead," said Liska.

Doug said he had emergency surgery to relieve hemorrhaging in his brain and was left with other life changing alterations. He said he now is, "deaf in my right ear and his retina was split," so he can't really see clearly out of it.

He is still recovering and now has a new philosophy on the lightening doesn't strike twice theory. "They are wrong, lightening does strike in the same area twice," said Doug.

He said he didn't have medical insurance when he was hospitalized in 2010 for his injuries. Although his family does have home-owner's insurance he is hoping they will not have to file a claim to replace electronics and appliances that were plugged in at the time the lightening struck, along with the electrical wiring throughout their house.

It may be a couple of days before power is turned back on at the Canfield house.