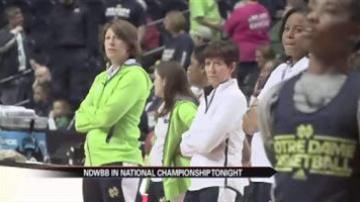 NASHVILEE, Tenn. – Tuesday night is the end of the line for the Fighting Irish.

Notre Dame and Connecticut are facing each other in the NCAA Women’s Basketball National Championship and both teams are undefeated.

The Irish and Huskies haven’t played all season, but the in the past three seasons they’ve faced each other 12 times.

UConn holds the series record 30-11, but Notre Dame has won the most recent match-ups winning the past seven of nine games.

The Huskies are striving to win back-to-back National Championships.

The Fighting Irish lost to them last year in the Final Four.

The former Big East rivals would admit there is a dislike between the two teams.

“There is an intensity factor. A lot of people go in to play UConn and they go in and see their jerseys and they’ve already lost the game. I don’t think we’re like that,” said Irish guard Kayla McBride. “I think we have a certain swag to us and it’s like that with any team, and I don’t know, I think, we already don’t like each other so that adds to it too.”

This is the first time two undefeated teams have met in the championship game.