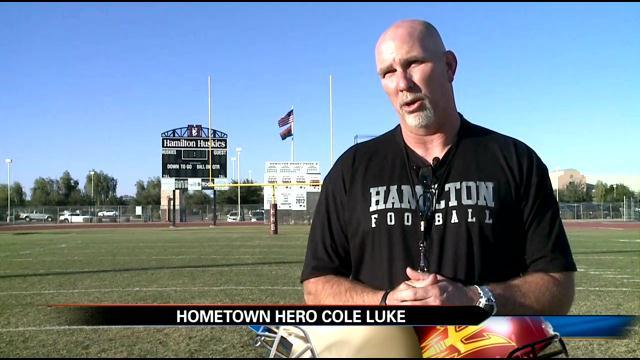 A high school near Tempe has a special connection to Notre Dame and sophomore cornerback Cole Luke. Luke got his start at Hamilton High in Chandler Arizona where he played for Steve Belles, a Notre Dame former National Champion.

Belles says he has coached at Hamilton High for the last nine years and in that time, Cole Luke is the only player who went on to play at his alma mater.

Belles says that is pretty special.

“I knew as a freshman that this kid was special," said Belles. “One he comes from a great family, a great mom, just a yes sir no sir type of kid and he's a kid that just absorbs football.”

Luke was born and raised in Arizona.

“The qualities really just came out right away with Cole and he progressed more and more each year, and like I said, he was a captain for us his senior year and you could just see it right away that he was going to do something special for us," said Belles.

Luke got the chance to follow his coach's footsteps to play at the University of Notre Dame.

“He asked me, if I went to Notre Dame what does it mean or what did it mean to you?" said Luke.

Belles knew it was the opportunity of a lifetime for Luke.

As a sophomore starting cornerback, Luke has been a key player for the Irish. He has led the team with three interceptions and five pass break ups.
“I think he's doing a great job at Notre Dame right now being one of the starting corners and helping Notre Dame get to the record they're at, at 7-1," said Belles.

It's a team Belles says in many ways reminds him of the team he played on at Notre Dame when they won the 1988 National Championship.

“We want for somebody to get the next one, and it could be this team if they keep winning," said Belles.

Luke has started all eight games this season and made a total of 27 tackles.

He ranks 28th in the nation with three interceptions in his eight games played.