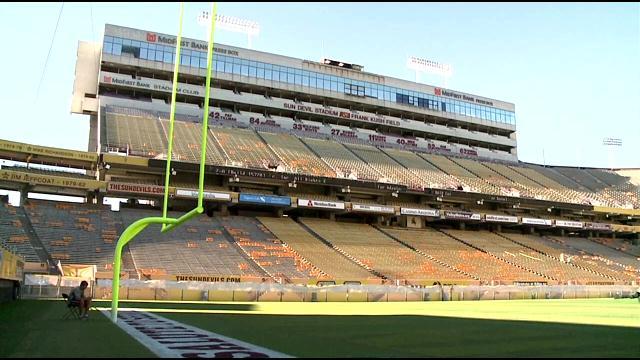 This past week in South Bend, it was cold and rainy.

Now the Fighting Irish are trying to adjust to the dry heat of Tempe.

"It's always good getting away from cold so we're looking forward to it," said Sheldon Day, Irish defensive lineman.

Head Coach Brian Kelly said they're trying to make sure the players are getting plenty of fluids.

"It's a challenge because we just practiced in 50 degrees," said Isaac Rochell, Irish defensive lineman.

South Carolina native Everett Golson says he doesn't have much advice for his teammates on handling the elements at Sun Devil Stadium.

"I don't know if I can speak on that since I'm the one that cramped up down in FSU. I have a Gatorade right now. I'm just trying to hydrate," said Golson.

The Irish know they just need to deal with it.

"It's just another element at the end of the day. It's still execution whether it's cold or warm," said Ben Koyack, Irish tight end.

Not only are the temps new, so is the kickoff time.

The Irish played their last two games at night so Saturday's 3:30 kickoff adds another layer to the preparations.