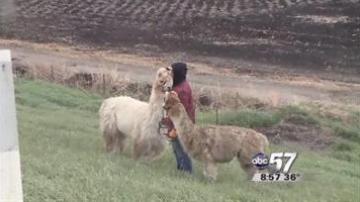 SOUTH BEND, Ind. -- A truck hauling llamas crashed Tuesday morning, causing one of the eastbound lanes to be blocked off.

It happened just before 6 a.m. on the U.S. 20 bypass between the State Road 23 and Mayflower exits.

Police say a truck hauling two llamas got into an accident when the driver lost control causing the trailer to flip on its side.

Traffic in that eastbound lane is back open. Nature’s Way, the animal rescue group out of Elkhart, was called in to help with the llamas.

The animals and driver were not injured.