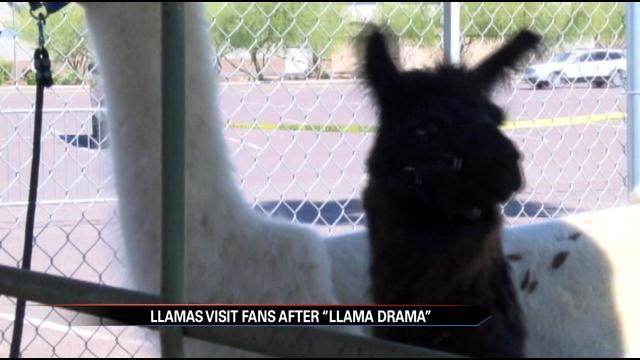 The llamas who had the Sun City on a major chase are back on the road again.

This time, they aren't on the run.

The llamas made a pit stop at the Turf Paradise Race Track in Phoenix to visit some fans.

Kahneeta and Laney are the stars of "Llama Drama".

Turf Paradise decided to cash in on their big stardom and bring them to the track to meet fans.

"It was a stroke of genius," said owner Vice Francia. "I was watching the news that day and what was going on in Sun City and moved pretty fastly to get folks that owned them."

"Everyone just loves the llamas because they love something different," said Karen Freund, the co-owner of the llamas. "But it's kind of fun to see them as celebrities. I didn't expect it to go so long!"

This could be the last time many get to see the llamas.

The owner says the USDA said they'll need to get a license to showcase them at any future events.