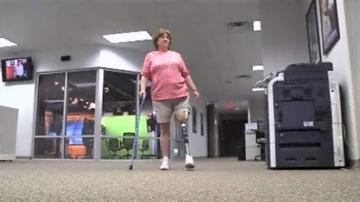 NILES, Mich. -- Several people injured in the explosions at the Boston Marathon lost lower limbs in the attack. A local amputee says losing a limb is not the end of anything.

Kim Heath is just as strong as the bolts and titanium that make up her left leg.

"My leg is above the knee amputation,” said Heath.

She had blood clots behind her knee and doctors couldn't restore circulation.

"Finally they told me it was going to have to go. I learned on my birthday,” said Heath. "I said, ‘No that's not going to happen.’ And I went for a second opinion.”

The second doctor gave her the same answer. So Heath had her leg amputated in Texas in January 2008.

Heath says everyone who loses a limb goes through stages of grief. It took her six months to get through hers, until she decided her new leg was just going to have to work.

Since her amputation, Heath has had two different prosthetics.

"At that time it was the first time I saw a prosthesis,” said Heath.

She first learned to balance, then used crutches and now she just uses a cane.

But she has her battles.

“That’s something for me that’s very scary is walking and falling. And I've done my share of falling,” said Heath.

She even deals with a phantom limb.

"It feels like your leg is there, it may be a toe that needs to be scratched sometimes that has happened,” said Heath.

At the beginning and end of every day she knows she's lucky.

She shares that with the local group Michiana Amputee Resources.

"It’s not to give them specifics on their prosthesis, it’s to let them know that there is life after amputation,” said advocate Terry Willis.

Willis says the experience can be hard on everyone.

"The acceptance or fear that they’re not going to be accepted by their spouse or loved one, amputation affects the whole family,” said Willis.

Everyone's heart ached for those affected by the Boston bombings.

Heath feels a special connection to those who have recently joined her family of amputees.

"I did, I watched it. It was very sad to hear about the amputations but they did live and they’re lucky to be alive,” said Heath.

The resource group meets every fourth Wednesday of the month at Memorial Hospital.

Both Heath and Willis say anyone who wants information is invited to attend.