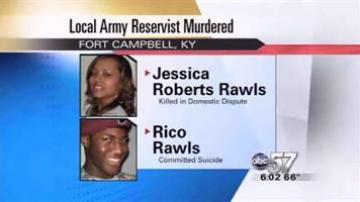 Police said she was shot and killed by her husband, Rico, and Army Specialist who lead officers on a chase and then committed suicide.

Rawls went to LaSalle High School and graduated in 2002.

She then went on to the military reserves.

We spoke to her high school sweetheart over Skype about who Jessica was and what led to her tragic death.

ABC57's Jillian Mahen has been following this story all day. Here is a look at what she uncovered.