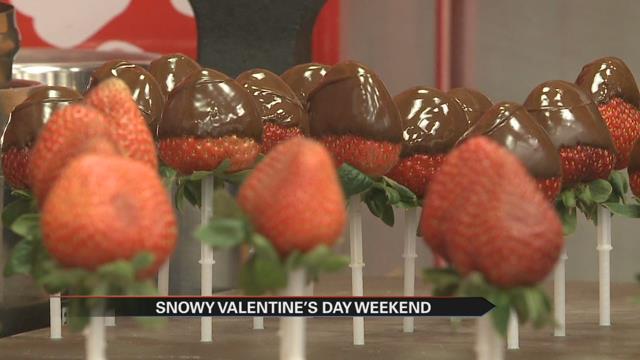 It’s almost the most romantic day of the year Valentine’s Day. But while couples in love are seeing red, South Bend businesses are seeing green.

With growing sales every year since they opened in 2013, Schnippel and her team at Edible Arrangements are preparing for their biggest Valentine’s Day yet.

“We are expecting, you know, big pick-up from last year and we’re prepared for that,” said Schnippel.

However, there’s one thing that could come between your valentine and their holiday delivery: snow.

“We’re praying that doesn’t happen. Hopefully we don’t get that much snow but you never know living in Northern Indiana what we will have,” said Schnippel.

If it does happen, Edible Arrangements will either reschedule the drop off or refund your money. But even with that risk, Schnippel says many people are still scheduling deliveries.

“I’m not anticipating the weather to effect sales or anything,” said Schnippel.

And while the snow continues to fall, love is also in the air on Lincoln Way West where the team at Wygant Floral Company have been keeping busy through the storm.

“We’ve been delivering all week long for the holiday. I don’t think they are affected by the weather as far as the sales go,” said Green.

The floral shop is closed Sunday so most of their flowers were taken out for delivery late this week. Green says they are taking extra precautions because of the weather.

“It slowed us down a little but I am prepared I have extra drivers on for the holiday. We’re still taking deliveries for tomorrow and generally we’re here until 1 on Saturdays but because of the holiday we will be here until five,” said Green.

Both businesses say they are even prepared to accommodate those who aren’t so prepared this Valentine’s Day.

“For really last minute people who don’t have time to place an order or forget about it, we can place it all the way up until 3 on Sunday,” said Schnippel.