Local chef plans to take business on the road 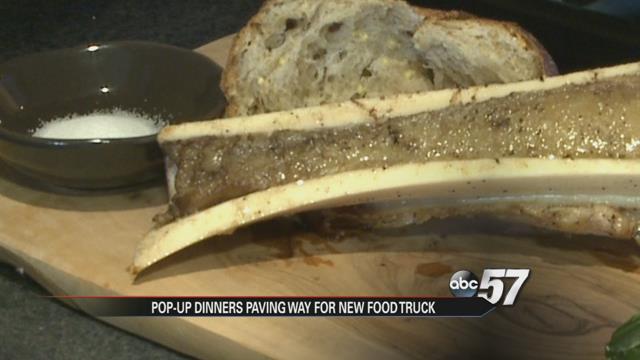 The holidays are a time for celebrating and in some cases gathering around with family and friends to share good food.

Mat Ewing is part of a local group of Michiana foodies called Michiana Cork and Fork. The group works to promote local restaurants in the area.

Ewing is a Chef and owner of Tongue N' Cheek. For the past couple years he has been having "pop-up dinners." It is his way of bringing people together for one common goal and that is to enjoy good food.

Monday night Ewing held a holiday dinner. To have a pop-up dinner, Ewing will find a host house for the dinner, decide on a menu, then post it to Facebook.

Then he will he will take reservations for seats which usually range between $40-$50 per seat. He will buy the food then transport it to the house he will use for the dinner.

“It’s usually around eight courses. Dessert and a full night of fun with random people most of the time. In a restaurant experience it would probably be four people. In this experience it’s 20 people. I load up this big plate of food and everyone passes it around, takes food, eats, talks about food, enjoys some drinks,” Ewing said.

Brandon Sharp is the Executive Director for Michiana Cork and Fork and served as the host for Monday night's dinner.

"Luckily the way our house is laid out we have plenty of room for entertaining. It's a good opportunity to meet new people, make new friends and try some food that you wouldn’t ordinarily wouldn’t walk into the restaurant and get,” said Sharp.

Back in September a food truck ordinance was passed in South Bend that sets regulations for what food truck operators can and cannot do.

Now that the ordinance is passed, Ewing has plans to take his business on the road in the future.

“Food trucks run by a chef will be delicious. With a truck you can move whenever you want, every four hours you can be somewhere different,” Ewing added.

He said he can save money by having a food truck rather than a brick and mortar location.

“Opening a restaurant can be $300,000 to a million dollars to really start with something nice. Food trucks you can get one built, straight from the factory, the way you want it for $100,000."

He added there are several things that go into starting up a food truck. “A knowledge of the business even though you’re not in a brick and mortar location. You still have to know how restaurants operate. You have to offer really good food, a really good personality too.”

In January he plans to start filling out paperwork for a food truck and start fundraising from there.