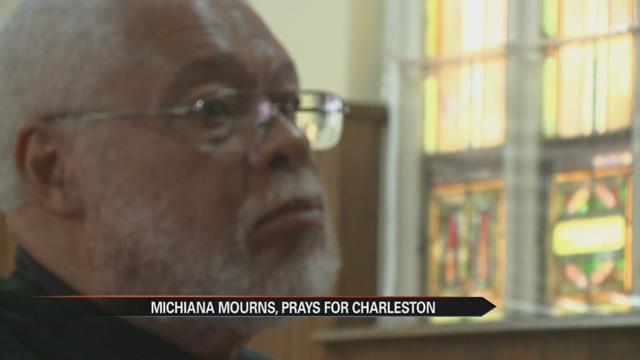 South Bend's oldest African Methodist Episcopal Church partnered with pastors all around Michiana to pray for the victims of the Charleston shooting.

It was a somber afternoon for many who came out to this special prayer service.

But the silver lining, at least to many members of the church, was coming together as a city through the power of prayer.

On bended knee, hand-in-hand, and heartbroken by the news of a fellow church in hard times.

“It's like taking the wind out of myself," said Pastor Rick Jackson of Olivet AME Church. "It's almost like being hit in the stomach.”

Pastor Jackson is in deep reflection on a church that means so much to this religious community.

His sanctuary opens a prayer vigil to everyone in the community.

Along with tears shed for the nine lives lost at Emanuel AME are prayers for an end to senseless violence.

“Going into the church and taking lives away, we've really got to do something,” said Kim Ervy, a member of Olivet.

And even prayers of forgiveness for the shooter.

“We hope that God says something to him to turn his life around,” Ronald Herron, another church member.

Because they believe prayer is the hallmark of faith.

“People are actually martyred for their desire and ability to pray. This ought to send a message out to the entire community.” said Pastor Jackson.