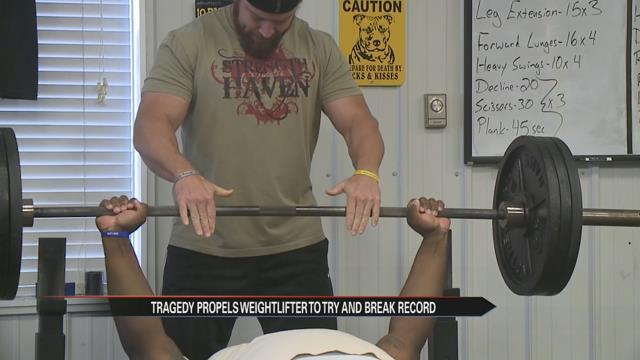 A local correctional officer is going to the national championship for bench pressing in Pennsylvania.

Davis is an Elkhart County Correctional officer by day and bench press competitor by night.

Dan Gibson said, “TD's got an opportunity to break an all time world record for his division so it’s pretty exciting.”

Coach and gym owner Dan Gibson said he is going with them to the USAPL National Championship.

David Boutsomsy said, “For us this is going to be an emotional trip because this is something we’ve been working so hard for.”

Boutsomsy will also be competing with Davis.

Davis said, “I’ll be wearing this along with a t-shirt of my son while I’m warming up and stuff.”

Davis lost 3-year-old Bryson Washington, a child he raised, when the toddler drowned in Baugo Bay this past June.

Davis said, “He’s going to be one of my three spotters while I’m getting my lift on.”

As Davis works to break a record at the world bench lift championship, he says he will be competing for Bryson and George.

Davis said, “I got his ring on, and I got the Big George bracelet, and my shirt, and everything and I got my little man tag on me too.”

Davis and Gibson said they want others to know they can turn their sadness into positive energy.

Gibson said, “Anytime tragedies hit me in my life the iron has kind of been my go to and I saw the same thing with TD so I made sure I was there for him.”