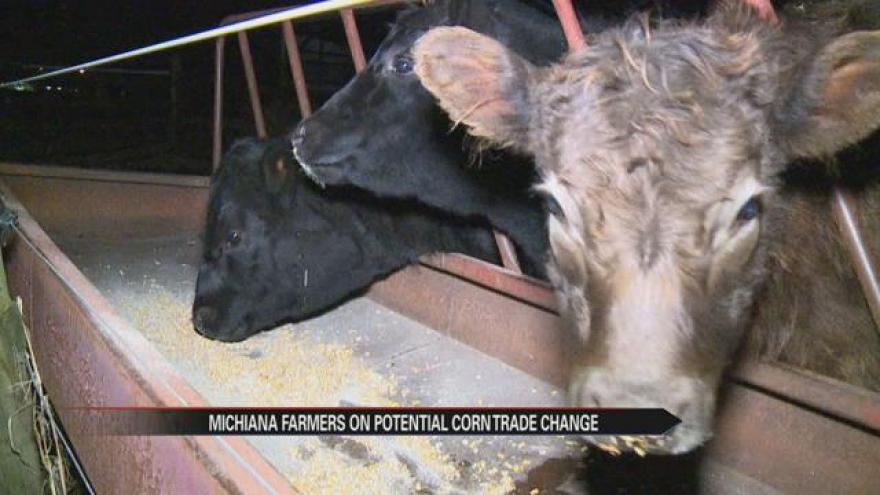 Responding to President Donald Trump’s threats to build a wall on Mexico’s tab, the country’s leaders are ready to retaliate and it could hurt American farmers.

Mexican senator Armando Rios Piter says he will introduce a bill this week where Mexico will buy corn from Brazil and Argentina instead of the U.S.

Mexico is one of the top buyers of American corn, the majority is produced in the Midwest.

Bullard now worries his income and that of other local farmers could now get even worse.

“Corn could drop 30%. They are already a dollar a bushel under cost and if it just happened to drop fifty or seventy-five cents for a bushel of corn, guys wouldn’t be able to pay their rent or pay the lease of their equipment,” said Bullard.

Mexico purchased $2.4 billion of corn from American farmers in 2015.

Jim Hilker, a professor of Agricultural, Food, and Resource Economics at Michigan State University, says the corn would likely be sold to other countries but it would end up costing US farmers more to get it there.

“When there is inefficiencies most of that does come back to the farmer because companies can afford for us to. Today with low prices every penny is important, so I don’t want to downplay it too much but it’s not like all the sudden $2.4 billion dollars goes away,” said Hilker.

Hilker says he does not anticipate the bill moving forward.

“It is inefficient for both countries and it will be as hard for Mexico as it is for the US. This is a common threat it tries to get people to the table and be rational and talk to each other,” said Hilker.

Bullard hopes it will serve as a wake-up call to U.S. politicians.

“It’s not just farm jobs or farmers, it’s a ripple effect through the rest of the economy. So I would hope this current administration decides that the farming industry is something they need to protect instead of just ignore,” said Bullard.