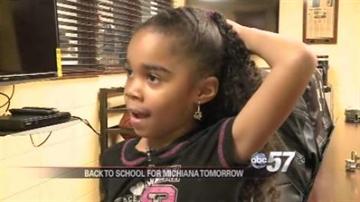 SOUTH BEND, Ind. --  ABC57 News caught up with parents in South Bend who have had to answer a lot of questions from their children about the tragedy in Connecticut.

"I am worried to go to school because I am in elementary school and I don't want that to happen to me," said Karina Scott.

People all over the nation are shaken up over the tragedy that struck Sandy Hook Elementary School in Connecticut. A 20-year-old gunman barged into the school and shot and killed 26 people. Twenty were students between 6 and 7 years old and the others were adults. He then killed himself.

Now parents all over the nation grieving for the families that lost their kids.

"It's probably the most heartbreaking thing I have ever heard," said Leon Scott.

Parents are worrying about the safety of their own kids, especially South Bend father Leon Scott, who said he is weary to send his kids to school Monday.

"I am terrified," said Leon Scott.

His kids are just as terrified.

"They have asked me, 'Daddy can I be home-schooled?'" said Leon Scott.

Scott said he has been answering a lot of questions in the past two days from his kids, 11-year-old Dante Scott and 8-year-old Karina Scott.

"I can't believe that that boy was so sick that he walked in and killed all those kids," said Karina Scott.

Karina and other kids at the Martin Luther King Center said they are praying for the families who lost their children.

"We are praying for you every night and we are sorry that you lost your kids right before Christmas," said Karina Scott.