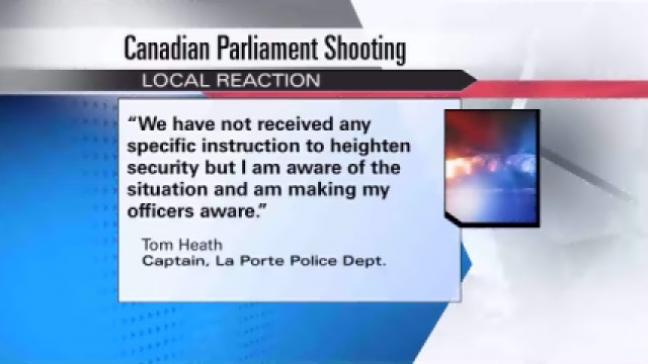 Law enforcement agencies in the United States are increasing security and awareness after the shooting in Ottawa at the Canadian Parliament building.

The FBI says there is no specific threat to the United States, but they are reminding law enforcement to stay vigilant.

Sergeant Chris Snyder of the Elkhart Police Department says he hasn't received any specific instructions, but is aware of the situation in Canada.

We have not received any specific instruction to heighten security but I am aware of the situation and am making my officers aware. - Captain Tom Heath, La Porte Police Department

Dean and I are sending our thoughts and prayers to the citizens of Ottawa as they grapple with this senseless act of violence and I also want to extend my heartfelt sympathies to the families affected by today's tragedy.  - Representative Jackie Walorski, R-Ind.

America stands united with our Canadian allies in the fight against violent extremism. We need to quickly figure out the details behind this tragic event to help prevent future acts. There remain a number of unknowns at this point, but we are anxious to see if there is a tie-in to Isis as they have stated their desire to bring the fight here. We are grateful for the service of our men and women in uniform, as well as their families, who put their lives on the line each and every day to keep our nation secure from threats at home and abroad.  - Representative Fred Upton, R-Mich.