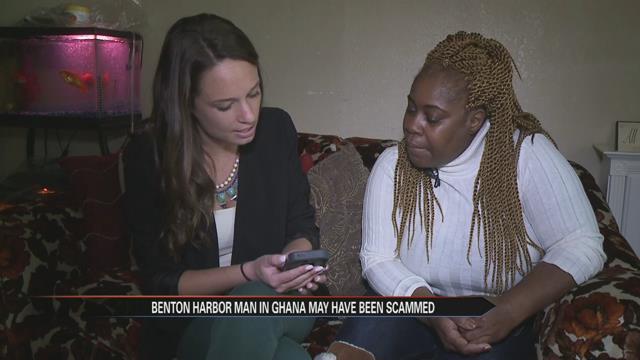 The Benton Harbor man trapped in West Africa since September 7th, may have been scammed.

The United States Embassy in Ghana tried to warn Americans like Roy Barry about various scams in Ghana on their website.

ABC57 has been digging for answers into an online friendship that turned into a nightmare for the Barry family.

Roy Barry was accused of trafficking a 6-year-old who the family would refer to as their "God-daughter."

His trial was set for October 7th but they delayed the trial on Wednesday to October 27th.

Since ABC57's last report, a representative from the US attorney's office visited Kimberly Barry in her Benton Harbor home.

Kimberly said, “It’s like a family feud going on and my family just got caught in the midst of that.”

Kimberly explained that two years ago her family developed an online relationship with a Ghanaian man and his "daughter." Through that relationship, they agreed to be "God-parents" to the girl and they wanted to meet her.

This week Kimberly found out that the man’s story is fake, the 6-year-old is not his daughter, and according to state department officials, the paperwork the Ghana guy gave Roy for the child was fabricated.

Kimberly said, “All I know is that he has broken a lot of rules that they knew about and that we definitely didn’t know.”

Kimberly said they sent money to the Ghanaian and the 6-year-old for food and school supplies. Once her husband Roy arrived in country to visit, he noticed that the money their family had been sending was not used for those purposes.

Kimberly said she is now embarrassed and confused.

We showed Kimberly the scams that were posted on the US Embassy's web page about Ghana.

Kimberly said, “My thing is, I don’t really know what a scam is to be honest with you.”

Kimberly said the biological father of the 6-year-old is testifying in her husband’s defense.

Kimberly thinks there is some type of feud between the 6-year-old's mom, the child's biological father, and the mother's lover.

Kimberly said, “What he told us about being a legal guardian, he lied about that because he has no say so whatsoever over 'Angel.'”

Angel is believed to be the name of the 6-year-old who is now in state custody pending the results of the human trafficking case.

ABC57's Alexandra Koehn talked to Angel's biological father on the phone. He said he sent a letter to authorities concerning the case, so there’s no way they can disagree.

The US district attorney, Congressman Fred Upton, and the state department are helping Roy and Kimberly during this difficult time. They are not allowed to speak with the media due to privacy concerns.