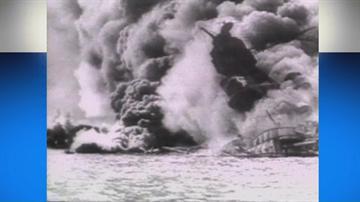 NILES, Mich. – Though he was a witness to one of the most shocking military attacks in history, Earl Judd Walls doesn’t think much about what he saw and experienced on the morning of December 7, 1941.

“Really, I don’t know whether it was any ‘experience’ at all, all we did was just watch them fly over where we were at we weren’t under attack at all,” Walls explained.  “All we could do was watch.”

Walls was a 17-year-old Seaman First Class serving in the navy at a submarine base across from battleship row in Pearl Harbor.  He had left his hometown of Buchanan to join the navy; he explained that he just wanted to get out of school.  He had been stationed at Pearl Harbor for seven months before the Japanese attack; the morning of December 7th had started like any other day.

“I was eating breakfast, then we heard explosions and we went out and we could see the planes flying over,” he described.  “I really thought it was a drill, almost every Sunday morning the Army had a drill, war games, that morning it wasn’t a war game.

Walls said he and his fellow sailors realized almost instantly that the hundreds of planes speeding over their heads were Japanese.

Across the harbor he watched as the planes bombed the US warships anchored and caught completely off-guard by the attack.

“Just the planes going over, you could see the smoke from the (USS) Arizona and the (USS) Utah,” he described.  “Don’t know what I thought to tell you the truth, it was just something to see, I don’t know what you would think at a time like that.”

From his position he watched as a direct hit caused the battleship USS Arizona to explode, killing nearly all of its crew.

“The whole thing was hard to describe, to tell you the truth, if you weren’t there there’s really no way to tell people what it’s all about,” he explained.

Despite watching the devastation and being unable to do anything about it, Walls said he doesn’t recall being fearful.

“Apprehensive, I guess that’s the word you would say, as far as being scared at that particular moment no, later on yes,” he explained.

The fear came later with predictions of a Japanese invasion of the Hawaiian islands.

“It never happened, but it was scary,” Walls described, he spent the entire night on guard duty at his base.  “That was a long night.”

The Japanese invasion never came.  Crews from Walls’ base were sent out to help rescue any survivors, and recover bodies, from the harbor.  He had witnessed a shocking and daring military strike that took the US military by surprise, left over 2,400 Americans dead and plunged the United States into World War II.

“I never gave it much thought really, I guess because I wasn’t actually in where all the kids got hurt, I guess that was my reason for not worrying about it,” he explained.

Walls served in the Navy throughout the war, his duty was to help supply US submarines.  He left the Navy in 1946 and returned to Buchanan.  He met his wife of over 60-years shortly after returning home and raised kids, grandkids and great-grandkids.  He sometimes attends ceremonies commemorating the anniversary of Pearl Harbor, though he’s known to be reticent to talk about his experience.

“It’s hard to believe that I’m still here this time,” Walls joked about the 70th anniversary of the attack.  “I think most people forgot about it anyhow…you never hear anyone talk about it except this time of year.”

Walls currently lives with his wife in Niles.