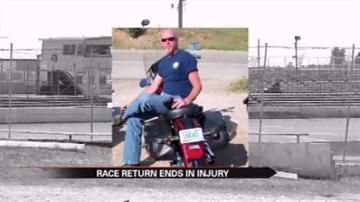 NEW PARIS, Ind. – Saturday night a local hero was seriously injured in a crash at the New Paris Speedway. He’s also well known for being the store manager at Monteith Tire in Elkhart County.

"They call him Mighty Mike Wortinger the guy is strong. When I was a little kid he was always the guy walking through the grandstands talking to everybody,” said Tony Eldridge, speedway announcer.

Eldridge was there for the accident that injured Wortinger.

He says it was supposed to be Wortinger’s big comeback.

"He'd been out of racing for a long time this was his comeback year with his son he wanted to do this father and son duo,” said Eldridge.

He was driving a white and blue car with the number 99.

His son Spencer was trailing him in the race and watched his dad crash.

"He went head-on into the wall full throttle. A lot of damage to the car and he had to be cut from the car. He was eventually airlifted to Fort Wayne,” said Eldridge.

Eldridge went the hospital Saturday night where he said the waiting room was full of family and friends.

He says at the track, those are the kind of people who fill the grandstands.

"No matter what happened last week, what happened this week at the race track, you all come together. When you watch your childhood hero go through pain, you feel that pain,” said Eldridge.

The family is taking off work and traveling between Goshen to Fort Wayne so Eldridge is holding a fundraiser for Wortinger and his family.

The fundraiser will be held at AT&T Fantastic Fines from 10 a.m. to 5 p.m. on Sunday May 19 in Goshen. They’re raffling off items like Willie Nelson tickets to photo shoots.