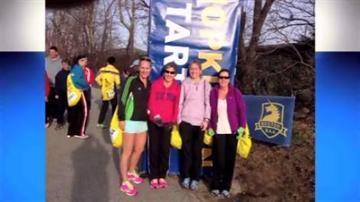 ST. JOSEPH COUNTY, Ind. – A local woman and Boston native who ran the Boston Marathon on Monday finished just before the two bombs went off near the finish line. She left Boston late Monday night and returned to Indiana Tuesday.

Laura Carlson got on a plane in Boston late Monday night after finishing her third Boston Marathon.

She has a photo that was taken at this year’s marathon of a group of Michiana women who all finished the race.

"They're cheering you on like you're a rock star and it’s really amazing,” said Carlson.

But the day of celebration after months of training was crushed by two bombs.

Carlson heard the bombs while waiting to meet up with her group just a few blocks away.

"It was incredibly loud and there were two very rapidly so everyone stopped and looked around something was wrong you knew that,” said Carlson. "As we started walking back to the hotel you could see something clearly was wrong just looking at the faces of the people around that area, there was fear people were scared."

Carlson and the group watched it from their hotel room.

Tuesday Moran showed up to her office sporting her shirt from a few years ago under her suit.

"My family was sitting there a year before where the bomb went off, so it just hit very close to home,” said Moran.

For those that have banded together in Boston before-they say it’s hard to shake the feeling.

"I'm from Boston so it was hard to leave. I'm so distracted today I'm not physically there but my heart and my head are still there,” said Carlson.

Carlson said the airport in Boston Monday night was fairly deserted but they found it encouraging.

They were interviewed by federal agents there because they knew they were runners.