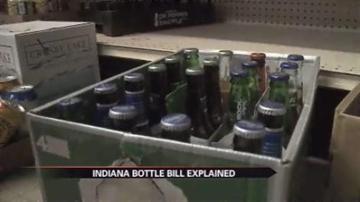 SOUTH BEND, Ind. -- Indiana state legislators are trying to pass a new bill aimed at getting more people to recycle.

The heart of the new Indiana bottle bill is good. Recycle more, save Mother Earth. Yet, the reality of it is a little bit harder to swallow for store owners like Robert Gorny, who owns and operates Joe's Liquor store in South Bend.

"It seems like a lot more hassle for what it’s going to accomplish," said Gorny. "I think we already do a pretty good job of recycling in this state."

While he still has questions, he knows it will be up to him to label each glass, aluminum or plastic bottle in his store.

When customers bring the containers back empty, he would have to pay five or 10 cents out of his own register.

Still, his job is not done. He must also find a way to get them to the nearest recycling center.

"The biggest problem is the storage of the empty cans and bottles," said Gorny. "I mean, where do we put them?"

He says that could even become a health hazard.

"Bugs, mice, it’s just bad. Unless every thing came back clean, but the chances of that happening are slim to none."

However, supporters in the glass industry are urging state leaders to pass the bottle bill. It's estimated 3 billion beverage containers end up in Indiana's landfills every year, resources that could be recycled and reused.

Despite the numbers, Gorny says legislators need to rethink before voting yes.

Many store owners say it should not be up to them to make sure people recycle. Plus, they say most residents already pay for recycling services at their home, which is why store owners say individual should be responsible for keeping cans and bottles out of landfills.