Local teenagers talk about their relationship with police 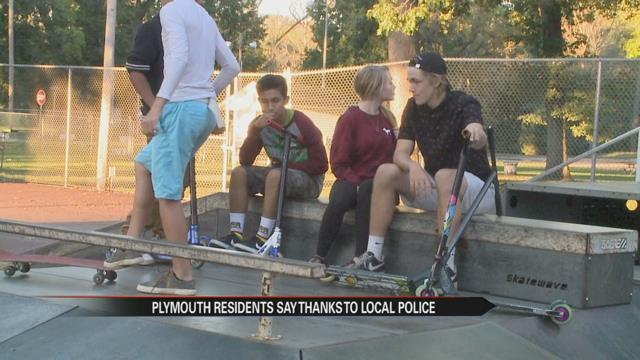 On Saturday people throughout the country were encouraged to show appreciation for law enforcement on National Thank a Police Officer Day.

In Marshall County the community has showed a lot of support for the Sheriff’s Department recently after the death of Sheriff Tom Chamberlain in August. Thousands in the community have paid tribute to the beloved officer by holding vigils and posting “501 strong” signs throughout the community.

But the support doesn’t stop there, and it’s coming from what many might consider an unexpected group of residents. A group of teenagers at the Centennial Park skate park.

16-year-old skater Colin Roth wants to be a police officer.

“I just think it’s really cool how they come out here every day and it’s just a nice job to do,” said Roth.

Many of the teens who skate with Roth at Centennial Park have that same goal.

“I want to be a police officer, I would enjoy helping people,” said 14-year-old Timothy Aber.

“I’ve been thinking that I think it’d be really good to help the world be better. I always like watching crime movies to find out more about investigating,” said 13-year-old Dominick Quinn.

But it isn’t just what they see in the movies that make them want to don the black and blue uniforms.

It’s how the police in Marshall County make the teenagers feel every day.

“They come here every night to shut it down at about 11:00 they shut the park and the skate park down,” said Roth.

They boys say the police often keep an eye on them when they cruise through the park.

“When you need them they’ll be there,” said Roth.

“They help the community be a better place from people doing like heroin and stuff. So it feels real safe here,” said Quinn.

And making them feel important.

“We have conversations, a lot of them 45 minutes of just talking.  They’re wonderful people, when you get to talk to them. They’ll get to know you and stuff so it’s good,” said Michael Siddall.

And for National Thank a Police Officer Day the teenagers skating at Centennial Park have a message for the officers looking out for them.

“I would like to thank the police for making it a better place for us,” said Quinn.