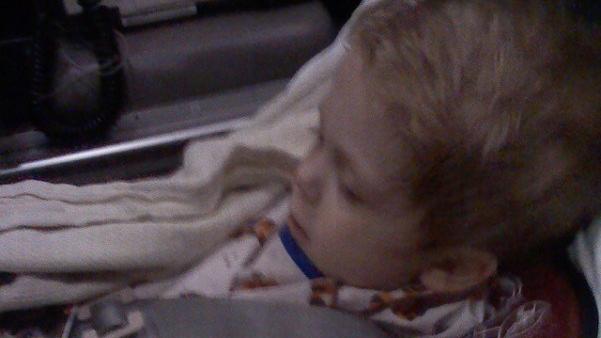 A Michiana toddler is fighting a rare cancer and his family is hoping for a Christmas miracle.

Two weeks ago 4-year-old Xander Sheehan was diagnosed with Neuroblastoma. His mother said he has a tumor in his stomach, chest, and cancerous cells were found in his bone marrow.

Jaki Davis said, "We found out because he'd been complaining about belly aches for a few weeks and I kind of thought he was just constipated for a while.”

Xander was rushed to Peyton Manning's Children Hospital in Indianapolis for emergency treatment. His grandmother said this has rocked their family.

Betty Kring said, "It's the size of a cantaloupe, it starts on the left size of his spine and connects to his kidney which is where they say it always starts, with the kidney, and it wraps all the way around to the side of him.”

Kring is taking care of Xander's siblings in the meantime.

Kring said, “It is a 40-50% survival rate at this point, so we're hoping as the chemo goes, that improves.”

Kring said finances have been tough, but some Good Samaritans in Michiana heard Xander's story and started filling Kring's garage with presents for Xander, his brother, and sister.

Kring said, “We struggle. We pay week to week for our bills and everything but just to see the outpour of love and support for him is just amazing.”

Kring said her daughter is a pharmacy technician at Walmart in town. She's staying with Xander at the hospital during treatment and is unable to work. Doctors said treatment could take two years.

Kring said “As a parent, I want to make sure she don't lose her apartment, and she's got money for bills. I hate crying like this, but just making sure she doesn't lose what she has because she's got to take care of her kids.”

A support group was started on Facebook under "Prayers for Brent."

If you would like to help their family pay for expenses during this difficult time, here is the link to the family's go fund me account: http://www.gofundme.com/isrfos