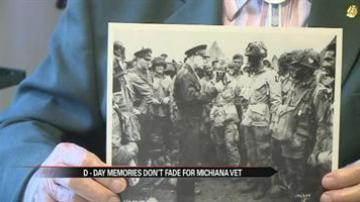 SOUTH BEND, Ind. -- It has been 70 years since Allied forces stormed the beaches of Normandy in the largest sea-borne invasion in history. For many it's a day to celebrate freedom, but for others the anniversary brings back the horrible memories of war.

Former St. Joseph County Superior Court Judge Robert Miller Sr. graduated from Notre Dame's law school in 1942. Not long after, he was in the military, on an aircraft carrier in the Pacific Ocean.

"It's difficult. It changed my life," said Miller.

Miller served as a lieutenant commander in the Navy and was stationed on the U.S.S. Essex aircraft carrier during World War II.

He was injured by a Japanese suicide attack.

"In April of '45 we were under another heavy attack with kamikazes and one of them let go of his bomb and it went off underneath my gun mount and we were all thrown out there with purple hearts," said Miller.

Miller's carrier was hit - not once, but twice by bombers.

The first man driven missile that killed dozens of his shipmates is the one that still haunts him today.

"When my eyes close, I can see that several times a day and that will go to the grave with me," said Miller.

Miller remembers long discussions at sea after finding out about another amphibious battle being fought in the European theater.

"There really wasn't any excitement out in the Pacific on D-Day, we were trying to stay alive ourselves and that was not foremost on our minds," said Miller.

He says the tolls of World War II and the Korean War will be imprinted on his heart forever.

"Notre Dame gave me a medal for heroism, but I got back. The ones who are out there, they are the real heroes and their families can be proud of what they did," said Miller.

At 93-years-old, Miller continues to serve our community.

He founded Miller's Vets which is an organization that provides housing for veterans.