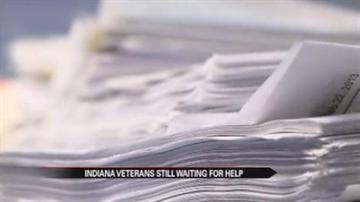 SOUTH BEND, Ind. -- Hoosier veterans who have suffered wartime injuries face a tough obstacle - how to pay their bills while they wait for compensation. Indiana has one of the slowest Veterans Affairs offices in the country, where on average, it takes more than a year just to hear back about a disability claim.

Mark Nesbitt is grilling out this Memorial Day like thousands of other Michiana residents.

But this day means more to him than most. He's a veteran, still waiting for benefits he earned.

He first enlisted in the Army back in 1984, but was forced out after suffering a spinal injury.

The Department of Veterans Affairs helped him out some, but it wasn't enough.

"Twenty percent wasn't enough for the injuries I had, but I didn't know."

His injury has progressed since, and now he uses a cane. He's filed a claim to get a bigger benefit, just so he can make ends meet.

Something fellow Army veteran Nathan Smith can relate to.

"You have to grin and bear it, and basically wait for your paperwork to go through," Smith said.

He enlisted in 2005, and suffered back and knee injuries. When he got home, he had to file a library of paperwork before he got any help.

"You may have won the battle, but you haven't won the war. That's about how it is getting your benefits."

So on a day where Michiana honors those who've served, both these veterans are questioning why they have to fight for benefits, an on-going battle, after they've fought wars.