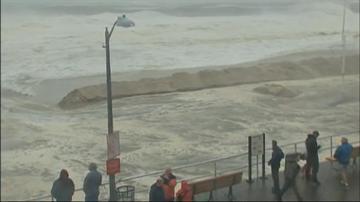 SOUTH BEND, Ind. – As Hurricane Sandy made landfall in New Jersey on Monday, threatening millions on the East Coast ABC 57 talked via Skype and phone with numerous Red Cross and local fire department volunteers who traveled into the path of the storm to help those affected.

Frank Connolly, Director of the Elkhart County Red Cross, talked with ABC 57 from White Plains, NY, where he is in charge of all the Red Cross shelters in New York State.

“We’ve got about 180 shelters open as we speak in the area that I’m responsible for,” Connolly described.  “The storm is getting pretty dramatic outside…there’s getting to be quite a bit of wind, driving rain.”

Connolly spoke to ABC 57 just as the storm was starting to hit the East Coast, thousands of displaced locals had already flooded into shelters in Connolly’s area and volunteers were still out in force preparing to weather the storm and deal with its aftermath.

“I’ve got too much to do to be nervous,” Connolly laughed as the wind rattled his headquarters.  “We’ve got a number of people in shelters, we’ve got both pre-landfall shelters and evacuation shelters and then of course we’ll shelter those who are impacted who may, unfortunately, have no place to go to after this storm.”

As the bulk of the storm passed over the area, Connolly explained local volunteers were staying in shelters to help those already evacuated and making preparations to deal with what problems will arise once the Sandy has passed.

“Every response is different, one of the things we say in the Red Cross is it doesn’t really matter what the event was, what the impact was, a disaster is a disaster if it’s affecting you,” Connolly described.  “Unfortunately the difference here is that we have a lot more people that are going to be affected by this.”

The Red Cross is asking for donations to deal with Hurricane Sandy and its aftermath, as well as more volunteers to help with relief efforts.  To donate call 1-800-RED-CROSS or text “Red Cross” to 90999.  For more information go to www.redcross.org/