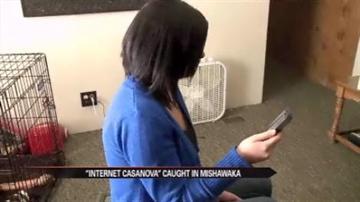 PLYMOUTH, Ind. – The man who is accused of conning women in several states spent part of his childhood and teenage years in Plymouth, Indiana.

His grandmother still lives in Plymouth. She said that she cut Raymond Holycross out of her life over the past year. She said she was unaware of his arrest and is very disappointed in his actions.

In addition to speaking with his grandmother, we spoke with a woman named Tabitha, who met Holycross on an online dating website called Plenty of Fish.

The woman said in hindsight, she fits the profile for the type of woman he is suspected of taking advantage of. She said she was very embarrassed that she fell for his lies.

"I feel ashamed of myself that I would fall for somebody's web of lies like that; or believe, believe everything that they were telling me,” said Tabitha.

She said he was using the name Rob Paris and the screen name BoredinLafayette.

He arranged to meet her after a month of talking via text messages.

From there he tried to start a relationship with the young woman and maintained contact with her for months.

"He seemed very smart and very charismatic and charming, and he was really handsome," said Tabitha.

She found out who he really was when she received an email Tuesday night.

“I get a message all of the sudden from his profile, so I went to his profile and it was his girlfriend that wrote me and told me his real name and told me to search him on Google and all this stuff and I did and I was very shocked,” said Tabitha.

She said she had been seeing him for about five months, and was with him on Valentine's Day.

"He was actually at my house for four days, so if he had not been caught last night, I mean I could have easily have been another victim," said Tabitha.